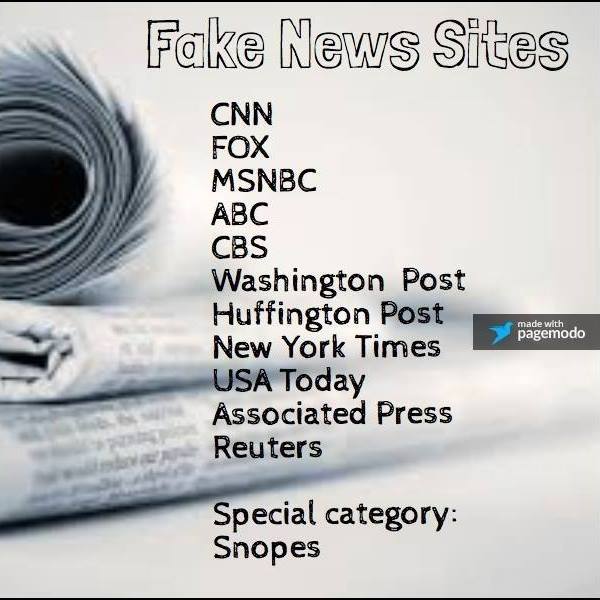 As America won its battle against leftist propaganda news and opinion publications in the November election, the mainstream media gang has declared a propaganda jihad against opposing information sources.

After the victory of Republican candidate Donald Trump in November 8th election, the left-aligned mainstream media didn’t take the blow very kindly. In their frustration, they started propagating a certain professor’s list of “fake news sites” – a list that declares the popular conservative and alternative media sources “fake”.

Leftist propagandists have started circulating this in an act of political war against information sources that defy their biased media’s coverage of issues and offer the opposing view. This has backfired already as followers of the alternative media and skeptics of the lamestream have created their list of fake news sites – as the one shown here – that is making rounds on Facebook.

The recent victory of Donald Trump in the US presidential election struck a heavy blow to the delusion of the left that by controlling mainstream media, it can easily brainwash people and dominate their minds for long. Many people now say they don’t watch CNN, MSNBC, ABC, Fox etc. and when they do, they do so with a critical eye and to follow up with consulting alternative media.

One thought on “Fake News Sites – The New War against Brainwashing”