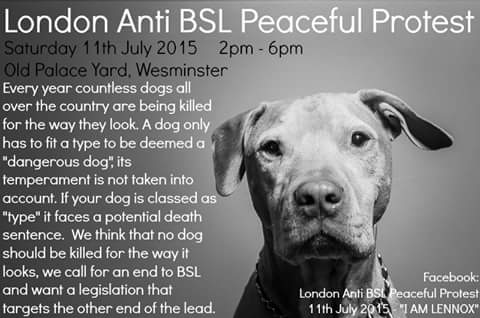 A peaceful protest has been organized for July 11, 2015 at the Old Palace Yard, London, in UK to demand abolishment of the law that discriminates against dogs on the basis of their breed.

Three years ago, animal rights advocates around the world protested the reckless killing of Lennox, a harmless pet dog in Belfast, Northern Ireland, UK. Huff Post wrote that the officials deemed Lennox a public threat because he resembled a pit bull. We all thought the officials seizing and killing Lennox are a public threat to lives and families, as well as to reason and sanity in general.

Lennox’s case drew worldwide attention and protesting voices against the breed-specific legislation (BSL – also popularly known as “BullShit Law”) that exists in parts of the world including many places in the United States. Many harmless and innocent dogs are killed simply because they are born as pit bulls or even because they just resemble the breed.

Lennox hasn’t been forgotten and his killing led to the unity of anti-BSL advocates who want justice and the right to live for this demonized breed that actually happens to be as friendly and loyal as any other dog. The 2014 documentary Tony’s Tale – Tragedy in Arizona makes a case against BSL and calls for awareness about this issue that has racked countless families.