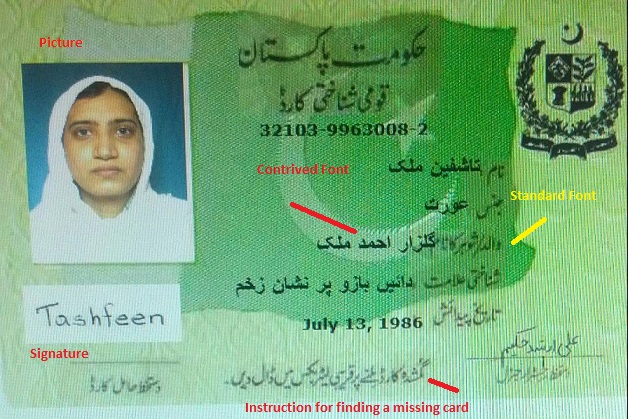 Today, mainstream media published something that left Pakistani readers wondering ad laughing at the professionalism of media and the seriousness of their claim to fact-checking: the official identity card of the San Bernardino female terrorist named Tashfeen Malik.

Part of the ID was flashed on CNN two days ago and today the Pakistani paper Express Tribune published the alleged ID’s front side. Being a Pakistani, I found it surprisingly entertaining that a so-called professional media source would be so unprofessional to openly present something so obviously fake.

While a Facebook page of the CNN videos showing the fake ID card has already received comments at by dozens and dozens of Pakistanis mocking at Malik’s fake ID, I would quickly like to point out a few major problems that non-Pakistani readers may find interesting about the card image (shown here).

Besides these main observations, the spacing between various elements of the card, notably between the authority’s signature (bottom right) and the overlay, is out of proportion when compared to a regular CNIC.

Now, with this kind of farcical reporting, how many millions of Americans and non-Pakistanis have already been fooled by these propaganda media sites? If there is an original, non-photo shopped card of this terrorist woman, we’ll all love to see and it’s media’s responsibility, particularly of Pakistani media, to show it live at the database office of the relevant district.