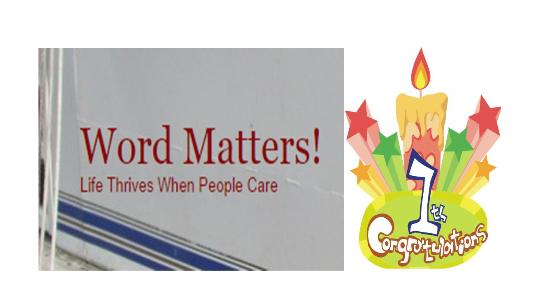 One year ago, the World Wide Web saw another blog appear on its virtual map – it was called Word Matters! Yes, the first post went live on October 1, 2013, and within less than a month, the blog got a Google page rank of 3 and was steadily climbing the ranking ladder on the web.

The story behind the Word Matters! in brief – it was created by me because I worked with a number of web publishing outlets including a site that I alone ran for over a year and made successful. However, when on my facebook page, I expressed my support for Edward Snowden’s activism for privacy rights, the editor of that site – a hard-shelled Democrat who, on my writing about the issue of gun control said, “There IS No Other Side to this issue” – removed me from the journal. I felt happy to not accept dictatorship and jumped into the freedom of the web. Thus Word Matters! was born.

Almost overwhelmed by the explosive response in terms of site traffic, the fact of having a platform where I could express myself freely without any politically-inclined, ill-informed, and quasi-delusional authoritarian editor, I found my own blog-writing venture quite fulfilling. Now I didn’t have to wait for any self-proclaimed journalist’s approval for my views and those whom I talked to about any issue I chose.

But at the same time, the journey has been a challenge. I study full-time and work part-time as an editor and nurturing my own blog of which I don’t make money is a constant challenge. Yet, it’s something precious I created and it has a good standing despite my weeks of absence from the blog.

I thank you all past, current, and would-be readers for making this platform a success. A big special THANKS to Victor Volkman of Loving Healing Press who set the site up for me. Currently, as the site stats show, Word Matters! stands in the top 500K sites internationally (among 30 million or so) and in the US, it has been climbing steadily, at the moment around 125K top US sites. So yes, this publishing venture will continue and hopefully grow as I got more interviews, reviews, events, and news coming up.  If there is one site that will be ahead of time’s arrow, it’s the one you are on.