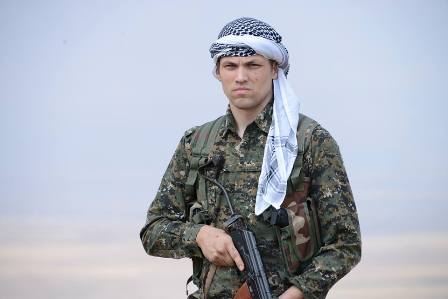 Unlike those who bomb from the air, one American warrior took on the ISIS terrorists in Syria by delving into action on the ground. His name is Jordan Matson.

The story of the former US soldier, who comes from Wisconsin, was published in The Huffington Post. Matson, 28, was disgusted by the atrocities and terror caused by ISIS but he wanted to do more than just verbally condemn the terrorists’ barbarianism against Christians and other groups. And he joined a Kurdish militant group fighting ISIS.

Matson, who flew all the way from US to Syria through various states, was quoted criticizing the US government for being slow in acting against the ISIS terrorists. He said, “For the U.S. government, it’s not about human life. It’s about how they look in the opinion polls.”

During an ISIS attack, Matson got injured in foot and is now recovering in a hospital in Syria.

Jordan Matson is one of those heroes who believe in dealing with the evil head on, instantiating the true belief in fighting for good. He is ready to go back to fight the terrorists. And the US and its allies need to get some inspiration and spirit of action from this American hero.