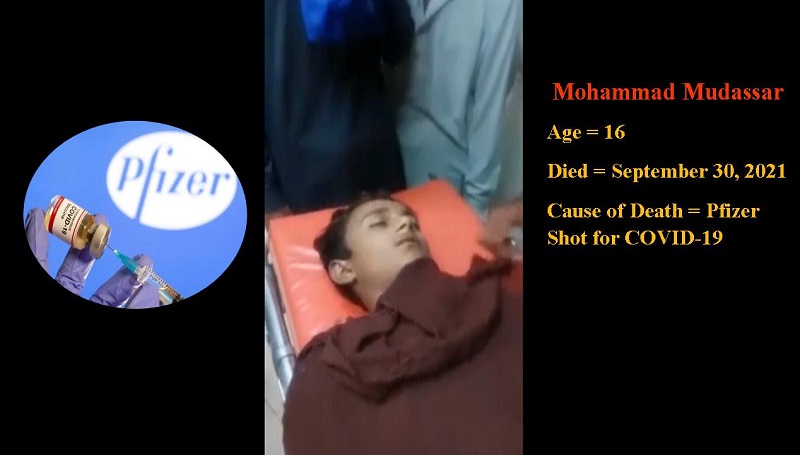 The murderous hands of Pfizer took another life – a teenage boy who was pressured into vaccination at his school in Pakistan without parental consent. He fell dead within 24 hours of the shot, and the administration is covering it up, as one would expect.

The death of 16-year-old Mohammad Mudassar was reported in Dawn on October 2, 2021. The story says that Mudassar died on September 10, a day after he was given the Pfizer shot for COVID-19 at his school. His father told media that the boy felt severe pain in his arm on receiving the shot at the Government Islamia High School in Vehari, Punjab. He died the next day.

TheHealthSite.com reported that the boy collapsed in his house the same day he got the shot.

The family members of the deceased schoolboy said that the boy received the Pfizer’s COVID-19 jab and later suddenly fell in his house at 4:30 pm, while doing school homework.

The school and local administration went in denial, as expected, to cover up the killing of the student with the jab. The authorities claimed it was uncertain what caused Mudassar’s death because the boy’s family refused an autopsy. But the boy’s father has denied this claim and said he asked for an autopsy and the health authority of the local hospital chose not to do one.

A video posted to BitChute shows the local report of Mudassar’s death with his dead body on a hospital bed and his family standing by the corpse and telling how the vaccination team forcibly administered the shot to the boy at the school.

COVID-19 vaccines have been making young people seriously sick since day one when they were approved by corrupt and tyrannical alliance of pharmaceutical industry and governments. Recently at a testimony before a panel hosted by Senator Ron Johnson, a Texan father broke down into tears as he shared his story of losing his 16-year-old son to the Pfizer shot.