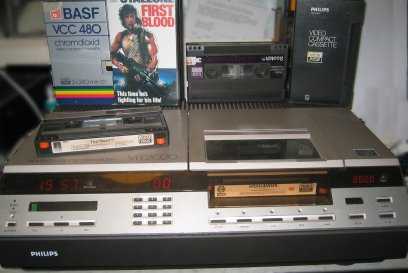 For those of you who thought the VCR was dead for a long time, may be surprised to learn that the VCR has met its demise. The Funai Electronic Company, based out of Japan, stopped producing video cassette recorders at the end of July, due to the lack of availability of parts, and the drop in demand, caused by technological enhancements and the changes in the way people watch television.

Back before VCRs were manufactured, the major television networks scheduled sitcoms, dramas, and other shows at certain times of the day or evening, and movies were shown when the film studios chose to air  them, meaning that people watched TV on the network’s schedule, not their own. However, with the invention of the VCR and other technologies today, you can watch TV whenever you want. Regardless of when a particular show was aired, if you owned a VCR back in its heyday in the 1980s and 90s, you could record your favorite shows and watch them whenever you wanted. You could even record one show and watch another at the same time. Let me give you a brief history of the VCR, then I’ll explain why the demand for them fell rapidly over the last two decades or so.

Although, film recording was possible as early as the 1920s, in 1956, Ampex Electric developed the original Video Tape Recorder, which was bulky, cost $50,000 per unit, and were primarily used by professional television broadcasters. However, that didn’t stop people from purchasing them. One Hundred orders were placed for VTRs when they made their big debut. See a video of Fred Fost’s demonstration of the VTR.

Hotel chains were the first customers to purchase VCRs in the 1970s, some twenty odd years after the original VTR was manufactured. In the 1980s and 90s, the VCR rose in popularity. According to Nielsen research, the number of consumers who had VCRs in their homes grew from 14 percent in 1975 to 56 percent in 1990. That number jumped from there to over 90 percent in 2005. That is until Nielson reported that in 2006, people had more DVD players in their homes than those who owned VCRs. Almost a decade after DVDs became popular, the art of watching television, as we know it today, took another more exciting, new turn with the use of laptops, smart phones, tablets, multi-functional e-readers, and smart TV systems. People can now stream their favorite movies and television shows via Netflix and Hulu, watch videos on YouTube, and watch and record their favorite shows on demand through their satellite or cable providers using the digital video recording service the company provides.

Unfortunately my dear readers, those of us who well remember the VCR during its heyday, what with you or your parents renting movies and the occasional cartoon, recording your favorite daytime or evening shows, and even taking home movies with a camcorder that used VHS cassettes, must say good-bye to the technology of yesteryear, and embrace the technology of today. If you still have a VCR that is in working order, unless you got rid of your old video tapes, my advice to you is hold onto it and enjoy it while it lasts, because you won’t be able to replace it once it dies. One final word of advice: if you have a DVD/VCR combo, be sure to transfer your VHS tapes to digital media, so you can keep your old memories for a lifetime.

One thought on “Outliving the Legend: The Demise of the Video Cassette Recorder”