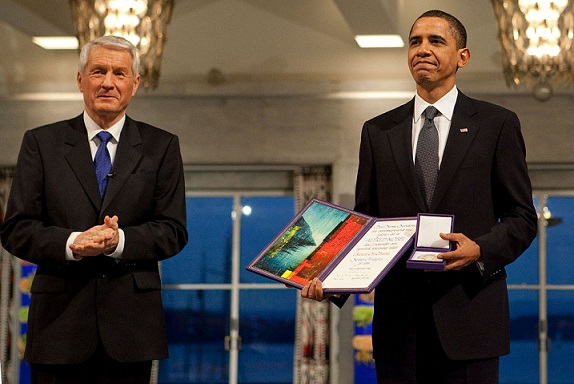 Soon after the public announcement of the decision of the Nobel Peace Prize Committee in 2009, I wrote an article to express my views. This article was widely published in the print and online media. I am quoting a few pertinent lines from my article with its heading: Swedish Academy is Failing to Achieve Its Holy Grail?

“It was a gasp of surprise that the Nobel Peace Prize has gone to president of the United States of America who has served his nation not even for a year and who has not demonstrated anything worthwhile, except in his statements for disarmament. The question is why the Academy was in a rush to honor him. The Academy could have waited for a year at least to let him justify receiving this honor. If it was mainly for his talks, then there have been leaders and presidents before him who made similar statements in favor of disarmaments and to make the world nuclear-free…”

Maniac messiahs, which I have illustrated in my epic poem “The Flame” (Vesta, 2008), are still on the increase, becoming more brutal. Unprecedented exodus of asylum seekers has failed to melt the hearts of Muslim nations. They have left it to the nations of the cross to accept this burden. These nations of the cross face domestic problems because of some wrong persons. It has been pointed out that around two percent of these asylum seekers consists of infiltrators. Peace is still will- o’-the-wisp and maniac messiahs are going to be more brutal.