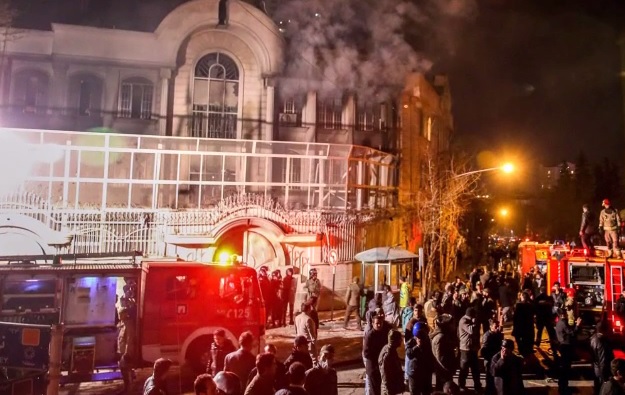 Angry protesters attacked the embassy of Saudi Arabia in Tehran, Iran, today and set it on fire. The protesters were reacting to the latest mass execution of anti-government activists in Saudi Arabia, including a prominent Shia cleric.

The Independent posted screenshots of Twitter accounts that posted pictures and videos of the protestors’ attack on Saudi embassy in Tehran. These included pictures of the Saudi flag taken down from the embassy and gathering of protestors in front of the embassy building that appears torched.

The mass execution of nearly 50 captives in Saudi Arabia, mostly activists that protested the atrocities of the Saudi government against civilians was making news way before it was announced earlier today by the Saudi government. Prominent Shia cleric Sheikh Nimr al-Nimr, a leader of the anti-government activists in Saudi Arabia, was among those put to death on charges of terrorism. It is worth mentioning that Saudi Arabia now also treats atheists in its Kingdom as terrorists and allows no criticism of government.

Besides Iran, protests against the torturous Saudi regime were also reported from other Muslim countries including parts of Saudi Arabia as well as from Bahrain, Yemen, and Pakistan.

Despite widespread incidence of torture, persecution, and oppression of people in-and-outside Saudi Arabia, the Saudi regime remains a key ally of the United States and Western Europe and gets weapons and technology from them to use against its political opponents.