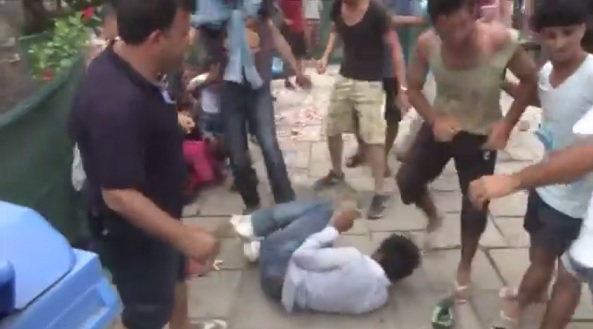 How desperate some people in the third-world get to make their way out to “developed” countries in the west was seen in a video report on The Telegraph.

The video shows groups of migrants on the Greek island of KOS where dozens of angry Pakistani, Afghan, and Iranian migrants engaged in a public exhibit of fists and kicks. Their rage owed to their desperation to get on board a ship that would take them to Greece from where they could hope to make their way to other parts of Europe.

One poor guy is seen repeatedly kicked and punched while security stands calmly outside the fence and watches the angry crowd showing their fighting skills. These are sad scenes to watch, yet in some way kind of funny to see how unreasonable people get because of competition.

And here’s the bit that got them really pissed – the Greek authorities is accepting Syrians as refugees because of the war in their country. I hope the non-Syrians weren’t praying for an overnight war to break out in their homelands that they left behind.