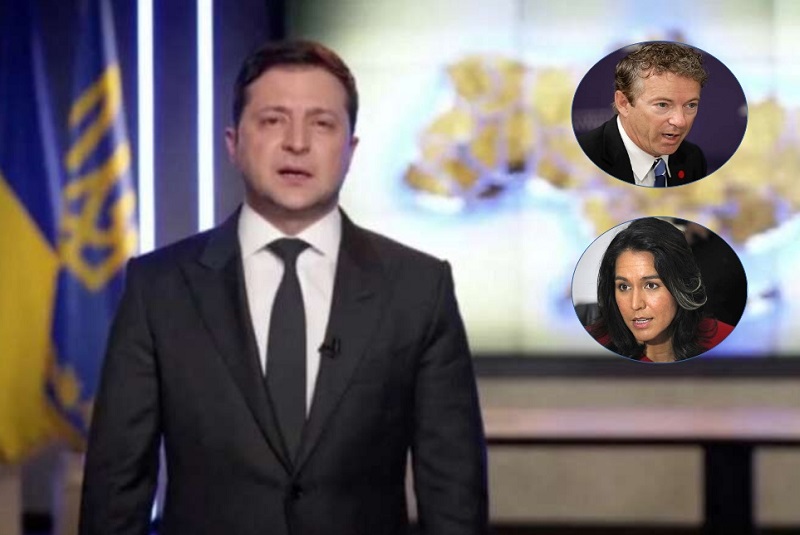 The Ukrainian dictatorship led by Volodymyr Zelensky is labeling everyone critical of his government or policies “Russian propagandists” and listed the among them are well-known American politicians Senator Rand Paul and former congresswoman Tulsi Gabbard.

American Military News posted the list of about two dozen prominent Americans labeled by the Zelensky’s government as promoters of Russian propaganda. Included in the list are Republican Senator Rand Paul and former congressman Tulsi Gabbard as well as journalists and other Americans active in politics and/or academia, commentary, and business. The people on the Ukrainian government list have disagreed with the mainstream globalist narrative of Ukraine-Russia conflict in one or more ways.

Gabbard, although a Democrat, has been critical of many policies of Obama-Biden administrations including the current Biden-Harris one under which the Ukraine conflict materialized into an active military war over the Donbas region. Fox News anchor Tucker Carlson had Gabbard over his show to respond to Ukraine’s blacklist that lists her as a Russian propagandist. Investigative journalist Glenn Greenwald, critical of the expenses Ukraine is wresting out of American taxpayers to continue its conflict with Russia, also appeared on Tucker’s show.

Political scientist John Mearsheimer was also put on the list for commenting that “NATO has been in Ukraine since 2014” and “NATO provoked Putin.”

Zelensky declared martial law in Ukraine since Russia launched its military operation to liberate Donbas from Ukrainian occupation and using military rule as an excuse, he banned political opposition and independent reporting on his country in March this year. Now, his government is blacklisting people in government and media abroad that question the mainstream leftist-run narrative showing him the good guy and justifying huge support packages at the expense of taxpayers in the west.

In the latest reports, Ukraine is planning to ask America for free natural gas.