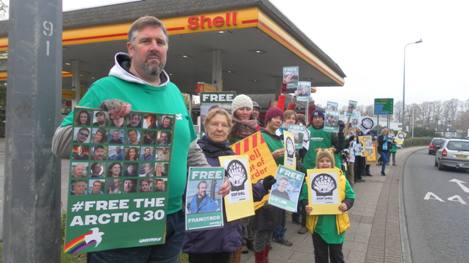 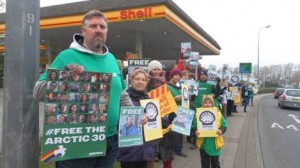 activists, now called Arctic 30, arrested in September this year. The arrested activists were charged with piracy.

An email update from Fran Grobke of Greenpeace notifies subscribers and supporters that protesters in UK, Germany, India, Belgium, Argentine, and the United States along with several other countries demonstrated in support of Arctic 30. Several of these demonstrations were held at the doorsteps of Russian embassies and oil giants Shell and Gazprom.

“The Investigative Committee will apply for an extension to the Arctic 30’s detention in court early next week,” wrote Grobke. “Here’s hoping that news about this global public show of support for the Arctic 30 will make its way to the presiding judge before then…”

Meanwhile, pop queen Madonna has also called for the release of Arctic 30, as reported on Raw Story. She follows Beatle legend Paul McCartney’s call on Russian President Vladimir Putin via  a letter requesting the release of the detained activists before Christmas