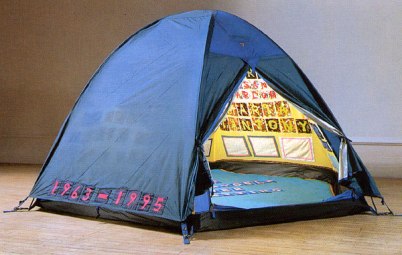 Artists are known for pushing the envelope when it comes to creating masterpieces. Often, the most controversial exhibits can produce enough exposure for an artist to build a name and a reputation. These are a few examples of the most shocking exhibits in recent history.

Dubbed as such by the creator of this exhibit, the performative birth titled “The Birth of Baby X” made headlines all over the world. New York artist Marni Kotak was the performer and her co-star was her newborn son Ajax. Microscope Gallery in Brooklyn hosted this controversial exhibit in which only a few lucky spectators were allowed to attend the live water birth. The gallery afforded Marni Kotak her own temporary living quarters for the event. The gallery and artist both received massive criticism for this exhibit, with some critics calling it “outrageously exhibitionist” and “a bit banal.”

A Notch in Your Bedpost

In the South London Gallery in London, England, artist Tracey Emin created an exhibit called “Everyone I Have Ever Slept With 1963-1995.” This is considered to be one of the artist’s most controversial exhibits to date. As the name of the exhibit certainly implies, Tracey named every person she had taken to bed as well as various ways by which she would “do the deed.” To add an element of intrigue to her piece, she also included names of those who she had literally slept with, where there was no sex involved whatsoever. Unfortunately, the piece was mysteriously destroyed in a warehouse fire in 2004.

Ashes to Ashes, Dust to Dust

Czech artist Roman Týc created a series of portraits for the Dvorak Contemporary Gallery in the Czech Republic. While that may seem rather benign, the medium that he used is what stirred up massive controversy. In his exhibit dubbed the “Grave Robber” series, the portraits were painted using human ash. Roman Týc says that he sourced the ash from a Prague crematorium where they were disposing of unwanted human ash. The artist and the gallery were both criticized for being morbid and highly inappropriate.

Is This What Dreams Are Made Of?

Artist Maurice Agis created a piece called “Dreamspace V” for exhibition in Durham, England. The piece was an imposing, interactive, walk-through inflatable sculpture with bright colors. What seemed like a pretty straightforward piece turned out to be a death trap. Tragedy hit when the anchors holding the sculpture in place snapped and the entire sculpture took flight with 30 people inside it. The accident left two people dead and 13 injured. Maurice Agis was convicted for breaching health and safety rules. He later renounced any ideas for future projects of this scale.

When Picasso first released his mural “Guernica” in 1937, the work was met with great disdain. The story portrayed on the mural shows a “picture of all bombed cities.” Since it’s unveiling, the mural has been petitioned, defaced, and even covered up. Over the years, the mural has moved from the United States to the United Nations and finally to Spain. The mural has now been transferred to a tapestry and resides permanently in the Museo Nacional Centro de Arte Reina Sofia in Spain.

Many artists aim to create pieces that will shock, intrigue, and entice. In some cases, these works can backfire and cause more controversy than intrigue. Sometimes criticism can turn a famous artist into an infamous artist overnight.

Toni Kelley is Art History major and lover of unconventional media. If you’re looking for help creating unique and custom exhibits of your own of your own, Toni recommends Excalibur Exhibits.