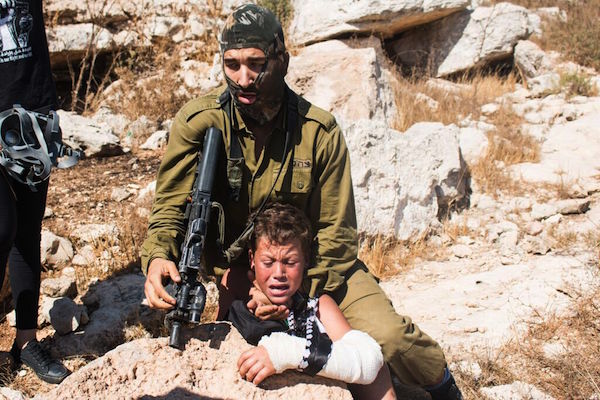 The video of an Israeli solider strong-arming a young Palestinian boy is viral and making headline news across the globe.

Vox commented on the story as” Israel’s Eric Garner moment”. Their commentary made a number of important points, regarding the condemnable behavior of the soldier who literally terrorized the child as he screamed and gasped in the grip of the masked soldier, before the soldier ultimately let him go after a number of women protesters intervened.

But even in leaving, the soldier threw a tear gas shell at the Palestinian group of women. 972 magazine reports that the boy’s women relatives who intervened were also beaten by Israeli soldiers and later sent to the hospital.

It’s probably not appropriate to call this armed man a “soldier” because that word carries a connotation of bravery and the way he handled a child – whose one arm appeared to be in a sling already – was a perfect example of cowardice. It was an example of terrorism without using weapons. And it was shameful, thanks to the person who made the video, now he will be in the archives of the disgraced.

To the Palestinians, please, when you protest, just leave your kids home or in a safe, sheltered place. Don’t drag them into this political mess that allows these so-called soldiers to target your children.