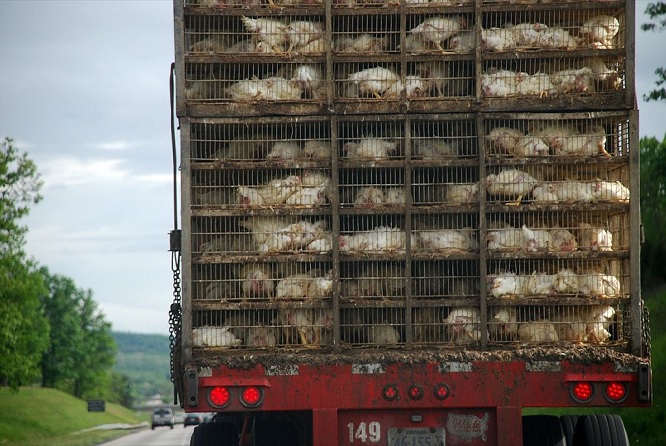 So Billy is in news again—the Microsoft mogul who has business interest in the vaccine industry and who, not so long ago, was held responsible by critics for paralyzing over 47K Indians with AFP that followed the oral polio vaccination campaigns. Now his eyes are set on the poultry farming in Africa.

People.com (of course) featured Gates for announcement of donating 100K chicken to poor African families, focusing on women-led households, in a dozen different countries in the continent. Isn’t that awesome news? Philanthropist Bill Gates caring so much for poor—right? Well, let’s look beyond the for-sale media headlines and features.

The People story says: “Gates told reporters he is working with global nonprofit Heifer International to boost the percentage of rural families raising vaccinated chickens from 5 percent to 30 percent.” There you go! The sentence pretty much reveals it all albeit in a much hidden and carefully wrapped manner. Two words from this sentence are important—vaccinated chicken and Heifer International.

Why vaccinated chicken? And who are Heifer International? Actually these are both related.

First, let’s talk about the vaccinated part. With Bill Gates, bearing in mind the polio vaccination business, it appears clear that he wants specifically vaccinated chicken to get in African communities. The vaccine industry could surely benefit from it by selling shots for the 100K “donation” chicken (unless it volunteers to offer free shots, which I doubt). But that smallish profit would just be the beginning.

It’s probably a less-known fact that vaccinated chicken are a threat to otherwise healthy, natural-bred poultry. This has been scientifically verified such that the vaccine administered for the deadly bird flu has been known to make the disease spread faster and longer than in natural-bred poultry. Introducing vaccinated poultry in local, vaccine-free birds could thus kill the local birds quickly because they aren’t immune to the virus they would otherwise not contract.

Bit of research on the web will tell you that vaccinated chicken are considered a threat by those who deal in the business. Tech Insider, for example, mentioned it in a story earlier this year.

“Most foreign trade partners won’t import vaccinated poultry anyway, however, since the test for the flu virus makes it look like birds that have received a vaccine are infected.”

Looks like? Yes, it looks so because they are infected—infected with the “whole virus” in vaccines that are labeled as “inactivated or killed” or live viruses themselves. Live virus vaccines, like the oral polio vaccine for humans, are highly contagious as the recipient’s body replicates and sheds the virus after vaccination, thus becoming contagious. The threat is serious to those healthy, non-vaccinated community members that have been free from it and suddenly come under its attack.

Is that what Bill Gates’ African poverty eradication dream would do to the local poultry? We have learnt from the polio campaigns that when paralysis follows vaccination, the vaccinators start media campaigns that they now need more vaccine to give to everybody so that they can be safe. Nonsensical as it sounds—and actually is—this is the rationale of the vaccine business.

Now to the second word—this Heifer International. Its profile says it’s another one of those “non-profits”. People who are bot easily fooled have some idea what these non-profits actually are and how they make profit and for whom. Just a quick glimpse shows that in 2009 GiveWell reviewed Heifer International’s website to assess it for quality of monitoring and evaluation and found that it doesn’t publish high-quality monitoring and evaluation reports of its projects. The donor decided not to give a grant to the non-profit because they couldn’t resolve the issues with Heifer.

But not to miss, less than a year ago, USAID showered praise on Heifer International when the latter committed to a project in Nepal which helped people “obtain vaccines, dewormings and other healthcare for their animals.”

There are too many links in this blog now, aren’t there? Well I would like to throw in another one about the widely observed brucellosis infection in cattle. A 2014 report says the vaccine is ineffective. Reading more about it is left to you.

So to the Big Billy, if he is so keen on helping the poor, maybe he will consider giving free Microsoft programs and software to buyers who have to pay for every updated version of a program that is 99 percent the same but still sells for a whole new price. Or maybe he could donate money directly to poor families for starting small businesses or buying tools to work with, instead of vaccinated chicken that he himself admits in the story would die if not raised by trained owners.

Die of what Mr. Gates? Aren’t they immune to flu? Or maybe it’s a twisted rationale, right?