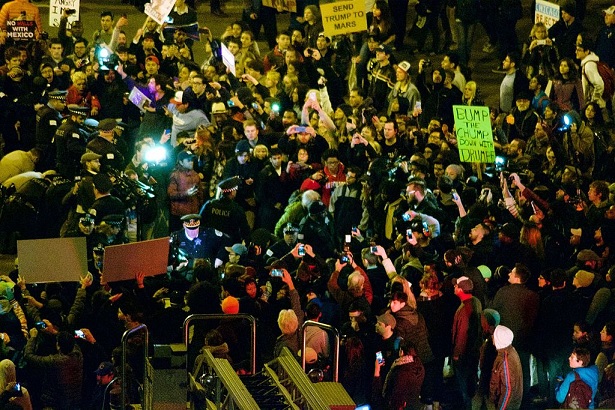 The first amendment of the United States Constitution gives us the right to freedom of speech. This is one of the reasons why we should be proud to live in this country. On the other hand, freedom of speech does not mean that we all get to agree with everyone else about what we believe in.

Politically speaking, this is why the party system evolved. Different sections of the population developed their own beliefs, and used these beliefs to strive for political superiority. Personally, I don’t believe in the party system. I think people should be allowed to run for office based on their individualism, and nothing more. If you like what he stands for, you vote for him. If not, then no.

Though many of us respect opposing opinions, some people feel that they would rather take drastic action against these opinions than simply respect the fact that we are all unique in our own way. When opposing groups fight with one another, causing political riots, how does that help anyone? If you think long and hard about it, who really benefits?

Though Donald Trump was popular enough to win the Republican Party’s Presidential nomination, a large segment of our population disagree with him vehemently. Many protestors have been very disruptive during Donald Trump’s political events. It’s okay to protest, but do it right. There are legal steps to take when fighting a cause or disagreeing with a particular philosophy. We are allowed to picket, sign petitions, vote someone out of office, or prevent someone from being elected by voting for the opposition. Doesn’t a protestor realize that when he uses physical force in order to fight a cause, it doesn’t make him look any better than the person he’s fighting against?

I will go further. It’s not just political opinions that cause riots. There have been riots over religion, territory, race, sexual preference, and higher taxes. Ultimately, a riot could end up as a full-fledged war. There is much frustration in this country. I don’t deny it, because I get frustrated a lot. This doesn’t mean that I will cause a riot. It means that I will use my assertiveness training in order to express my opinion in a respectable matter and leave it at that.

I know how to disagree with someone and remain friends with that person, just as I hope that if others disagree with me, they will continue to be my friends. Let’s stop fighting and try to get along. We will never agree with everyone about everything, so let’s all relax. Life is too short.