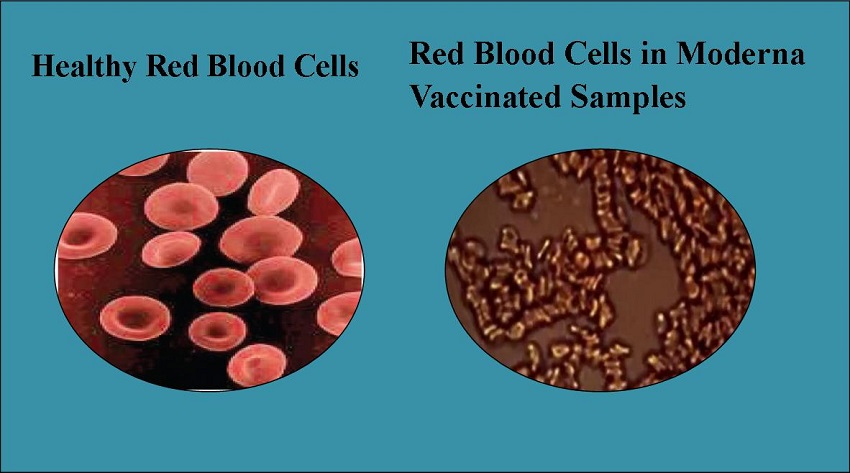 Blood samples of people vaccinated with the COVID 19 shots show alarming abnormalities in red blood cells, reports have surfaced while corporate media observed a blackout on the story.

Independent journalist Stew Peters interviewed health investigator Dr. Jane Ruby on his show about analysis of blood samples of vaccinated patients in Britain, whose doctor studied their blood under a microscope. His findings, as reported in Europe Reloaded last month, are nothing less than shocking. Dr. Ruby shared the images obtained from the doctor, showing red blood cell abnormalities in blood samples of patients who got the Moderna vaccine for COVID 19.

Unlike healthy round red blood cells of normal people, the red blood cells in the blood samples of Moderna vaccinated patients appear tubular and diseased, many of them clumped together, as seen under a microscope.

The story says that Dr. Ruby likens this red blood cell distortion to the ‘folded over’ graphene oxide structures.

There is also, she says, corroborating evidence of the graphene oxide hypothesis, which seems to be picking up steam.

It was reported last month that Spanish researchers discovered Graphene Oxide in Pfizer Vaccine, although mainstream media largely ignored the story and a few sources denied the reports were credible without backing up their claim with scientific evidence.

Dr. Ruby opined that the blood cell abnormality observed in these samples look poisoned and would explain the incidence of blood clots widely reported among COVID vaccinated people, and also to the dangerous health effects reported particularly among those who get the Pfizer and Moderna shots. It is relevant to mention here that abnormal cell shape also leads to abnormal cell function, as basic biology goes.

The BitChute video of Dr. Ruby’s interview with Stew Peters, included below, has been vied over 85 thousand times since it was posted on July 18, 2021. The mainstream media has conveniently ignored this important story – and no surprises there.