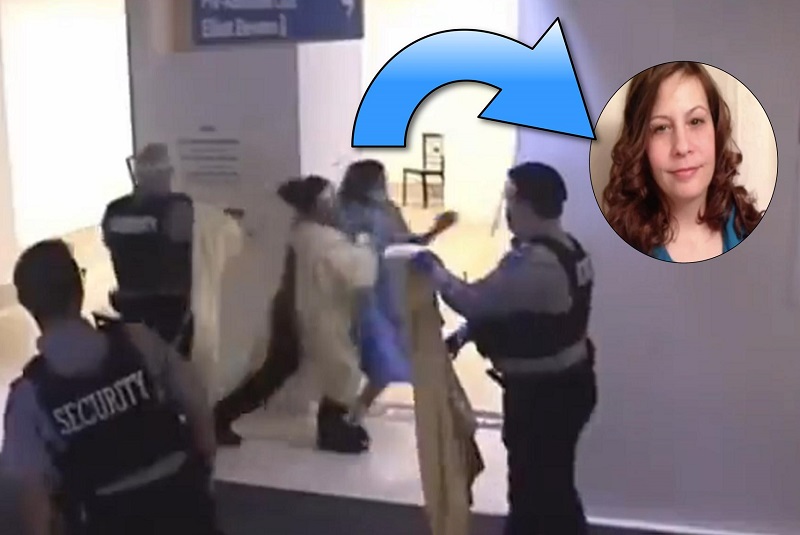 The sad reality of hospitals turned into death camps was shown once again with the video of a Canadian woman being killed by the security staff of a Toronto hospital. The reason? She was not wearing her mask properly.

CBC reported on the death of 43-year-old Danielle Stephanie Warriner at the Toronto General Hospital in May 2020. It was a time when the leftist COVID tyranny was at its peak and the medical mafia hounded people who did not follow the draconian rules of masking up in public places. The hospital’s security staff had been charged with manslaughter over the death of Warriner, but the case against the guards – Amanda Rojas-Silva and Shane Hutley – was quashed in November 2022.

Now a new video from the Toronto hospital cameras has been revealed, showing the guards physically attacking Warriner, forcing her against a wall then minutes later, wheeling her apparently lifeless body away. The video was tweeted and shared widely on social media. Paul Joseph Watson is one of the people sharing it and calling it worthy of an international outrage.

This should be an international outrage, yet this is the first I’ve even heard of it. https://t.co/JT8ZKcC1zk

Warriner’s sister Denise was cited in Vancouver Sun saying the hospital authorities showed that they had a license to kill.

“She was a very tiny woman who was clearly unwell, sitting, dealing with respiratory distress and they wrangled her to her death.”

Sixteen days after Warriner’s unconscious body was seen wheeled away, she died in coma, never regaining consciousness and was taken off life support. It was a killing caught live on video. But there are no consequences for the killers at the Toronto hospital. CBC wrote:

In a surprise move by an Ontario judge on Nov. 22, the case against the guards has been quashed and the trial that was supposed to begin this May struck from the docket.

Warrine is one of the many victims of the worldwide COVID Gestapo that injured and killed countless people using the so-called health emergency as justification – all to enslave people and impose new norms on them with no civil rights except those the rulers calling themselves “experts” and “scientists” dictated for them.