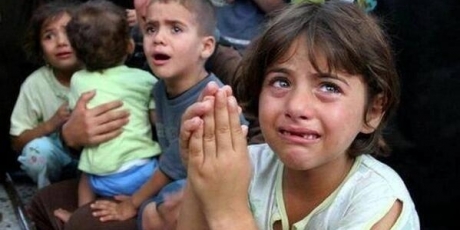 War is misery, and it spares no one. This is so true of war in our days when terrorists, or freedom fighters – whatever is the case – hide behind civilian populations and the force they are combating recklessly targets the civilian population to hunt down its prey. Unlike the good old days when war was fought more ethically – between armed forces on a battleground. Not in cities. Today, war is aggression on everyone, and more on civilians than those who are paid to fight.

The recent Israeli offensive in Gaza stands as an example of war fought on bodies of innocent lives from both sides. This post on Avaaz, world’s leading activism organization, gets the gist of the war business and points to the best solution – cutting the investment made into war. The post is made to back a petition that calls on CEOs of major companies who are furthering the violence by funding it.

“The only way to stop this hellish cycle of Israel confiscating Palestinian lands, daily collective punishment of innocent Palestinian families, Hamas firing rockets, and Israel bombing Gaza is to make the economic cost of this conflict too high to bear,” reads the post.  The message is to make the economic cost of the war too high to bear – the most effective non-violent way to stop a violent conflict.

Avaaz is confident that this approach to ending the Israeli-Palestinian violence works. In an email message to subscriv=bers, the organization wrote: “We know it works – when EU countries issued guidelines not to fund the illegal Israeli settlements it caused an earthquake in the cabinet, and when citizens successfully persuaded a Dutch pension fund, PGGM, to withdraw, it created a political storm.”

Of the 1.5 million target, this petition has been signed by over 1.2 million people. It’s call for ending bloodshed by using the right means – stop putting money into war, because war maybe business for those who earn by it, but it is only pain and suffering for the masses.