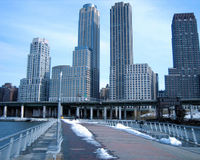 In a move reeking of discrimination against the poor, a new residential building in New York City is reportedly being planned with separate doors for low-income residents that come to inhabit its affordable units.

A care 2 petition called Ban “Poor Doors” For Apartment Buildings in New York City protests the discrimination against poor that this proposed building will cause. And that is not the only way poor are denied the amenities that the more financially sound residents are allowed. The petition says:

The new condos, to be built by real estate developer Extell, have been approved now by the Department of Housing, NYC, though the idea of separate entrances for the financially weaker residents met some opposition last year when the building plan was put before the Housing Department.