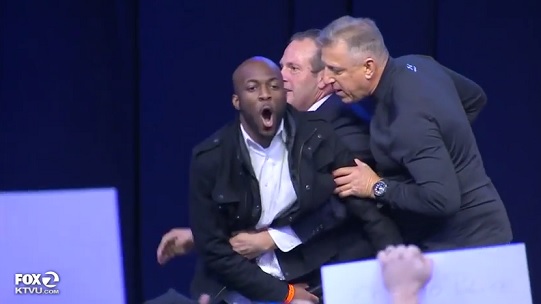 In 2013 general elections, Taliban in Pakistan targeted the secular political parties of Pakistan to help win the pro-jihadist side win. In 2016, nearly the same thing happened in Chicago, and the target was Donald Trump.

The cancellation of Donald Trump’s campaign rally in Chicago today has left a black (no pun intended) stain on the transparency of political process in America. In 2013, Pakistan saw similar coercion of secular parties – the Pakistan People’s Party and the Awami National Party – by Taliban terrorists. Today, America saw its Taliban doing the same to Donald Trump, the leading Republican candidate for 2016 presidency.

And while the thugs with terrorist mindset are bringing third-world politics of coercion against Trump to United States, the country’s own establishment including the Republican party are reportedly meeting with big shots to devise a strategy for stopping Trump from Republican nomination.

Can America afford such terror on its land while still claiming to be a developed country with a democracy? Can political freedom be stifled like this to the advantage of the side that calls for such vandalism under the thin mask of equality and justice? It’s about time the people decide.

One thought on “Taliban in Chicago Cause Trump Rally Cancellation”