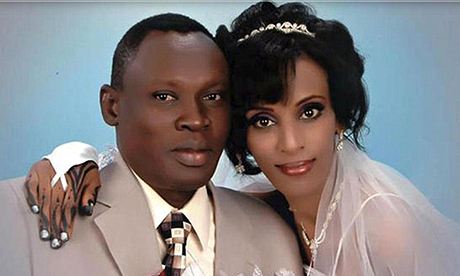 Saudi Arabia, Iran, or the Middle Eastern Islamic states are not the only ones terrorizing ex-Muslims who leave Islam and embrace another religion or ideology. Laws in Sudan are equally dark and hideous as we are witnessing in the case of Meriam Ibrahim, a woman who chose Christianity over Islam.

The Guardian reports that Sudan is facing increasing pressure for one of its courts’ death sentence awarded to Meriam Ibrahim because she was the daughter of a Muslim father, though she was brought up by a Christian mother and was always a Christian. She married a Christian man and this set the fanatics in her country on fire. They have accused the pregnant woman of adultery and apostasy, sentencing her to torture and brutal killing via a terror court. All this happening in the 21st Century!

Fundamentalist Islam has long persecuted ex-Muslims for leaving Islam by labeling them as “murtad”, i.e., apostates, and sentencing them to death – a policy of open terrorism on those who leave Islam. At the same time, the hypocritical fundamentalists welcome any non-Muslims converting to Islam – something that exposes their insidious nature.

Despite this policy of terror, the west has been friendly and remains allies with countries like Saudi Arabia where apostasy is punished by death. What about Sudan? It happens that Sudan’s very head of state President Omar al-Bashir remains accused of crimes against humanity and the UN has been showing a soft side for him, for who knows what for its own political agenda. Or is it the oil-rich Darfur? Better left to the reader.

Meanwhile, Steve Dolby is gathering signatures on a petition on Care2 in support of the demand for US and UK governments to pressure the President of Sudan for releasing Meriam Ibrahim.