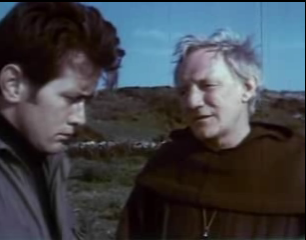 Based on Brian Moore’s novel-turned-screenplay, Jack Gold’s Catholics is a 1973 TV film that stands for its great intellectual appeal as well as for its perfect setting – not to mention some remarkable acting by all main performers.

The film shows a small group of devoted Catholic monks on a remote Irish Island (the film is set sometime in future), who, under the leadership of The Abbot (Trevor Howard), adhere to the traditional Catholic ways of prayers, including mass in Latin while the rest of the western world has adopted a mainstream, modern version of Catholicism. When the Catholics on the island start becoming popular internationally, Rome fears a counterrevolution and sends a young emissary, Father Kinsella (Martin Sheen), to bring them on board the Rome’s version of Christian religion.

From the moment of Father Kinsella’s first meeting with the Abbot, the film engages viewers by the potential conflict between the two characters, representative of two huge philosophical concepts – individual versus authority, and as the story proceeds, the line between them gets blurred. The biggest question raised in the film is obedience or playing by the rules of an institution when one has lost faith in the authority’s veracity. Shall a person be true to his faith or his allegiance, and to what degree? A huge question indeed and treated with such brilliance in quite a short film (70 minutes).

The setting of the film is perfect – a remote island for people who remain far from the mainstream, physically and ideologically, and yet are in reach and influence of the authorities because of the basic value of allegiance that is part of the faith they live by. The dialog in the film is so alive, and very believable. The final scene ending with a close-up of the Abbot visually makes an imprint on the memory, very much owing to Trevor Howard’s masterful acting.

Anyone taking pleasure in an intellectually arousing film or some serious discussion about freedom and authority in religion shouldn’t miss watching Catholics, provided they can accommodate the quality of camera work of the 70s TV productions.