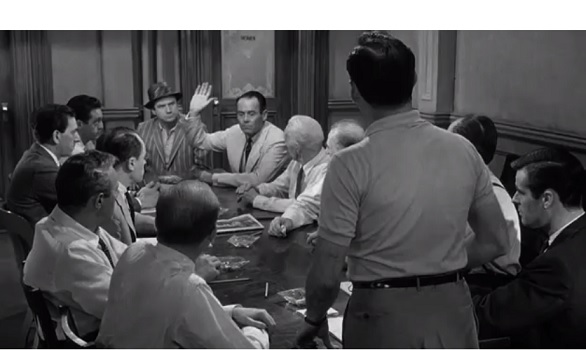 The news of a key Ferguson witness faking her entire testimony before the grand jury has shaken the belief in the grand jury system once again. The jury system’s inadequacies and failure to provide justice in such sensitive cases is nothing new. It happens and has been happening. And Hollywood has made quite a few good hits that show the jury system’s shortcomings.

The 1957 film 12 Angry Men by Sideny Lumet is a timeless classic that portrays the essence of why the jury system of justice can fail in serving justice in cases as serious as homicide. The film is a drama taking a room with 12 jurors sitting to decide whether or not a young guy accused of murder is guilty of the crime. By law, all 12 jurors are required to unanimously agree on a single verdict.

As the voting starts in the room, 11 jurors quickly vote “guilty” on the verdict but one juror (Henry Fonda) disagrees and wants to discuss before deciding whether the accused stands guilty. With the discussion proceeding and arguments presented on all sides of the table, more jurors change their vote to “not guilty” and in this process of conversion, the prejudices, uncertainties, vulnerabilities of the jurors come to surface along with the psychological influences that had clouded their faculty of judgment earlier.

Enjoy the scene of the first round of voting when Henry Fonda starts as the only jury member at the table to vote in favor of the accused.