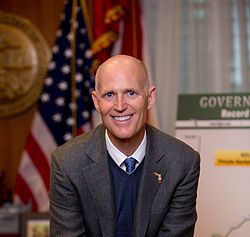 Republican Rick Scott has been re-elected as Florida’s governor. Scott beat his Democrat contestant Charlie Crist Tuesday to become the governor of FL.

WCTV reports that Scott beat Crist by a narrow margin of only one percent – i.e., 48 to 47 percent – in the latest election. In 2010, Scott had won against Alex Sink.

In Tuesday’s elections for the Senate, republicans won the majority of seats as well as major governor offices in many states. ABC News called the Republican victory a “a major defeat to President Obama and Senate Democrats”.