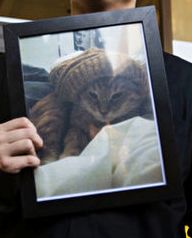 Three teenagers in Alberta, Canada, did one of the most horrible crimes imaginable. They stole an aging cat and stabbed her to death. Animal rights activists across the globe are asking for justice for the victim.

Animal Cruelty Legislation Advocates Canada has started a petition on Change.org that tells the story of the 15-year-old cat, Pudge. Three teens – two of then 18 years old and one just 14 – have been charged with animal cruelty for stabbing Pudge to death with scissors. Not only that but 18-year-old Zachary Allen McKinnon of Edmonton, Alberta, admitted the cat and then “cooking it”.

Edmonton Journal reported last month that McKinnon has been sentenced 10 months in jail for the crime. The Care2 petition, meanwhile, also seeks punishment for McKinnon’s partners in the crime.  Close to 7000 people have signed the petition demanding justice for Pudge.