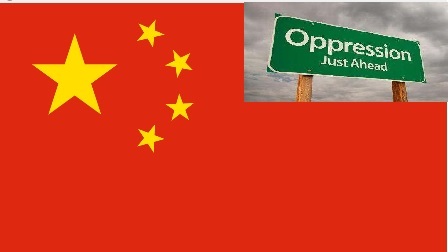 In Saudi Arabia, Pakistan, and many other Islamic countries, the Islamic practice of fasting dawn to dusk during the month of Ramazan on Islamic calendar is imposed on the non-fasting population. Public eating is banned for all, even non-Muslims, in these countries where Islamist law is enforced in its intolerant form. But China is doing the same to Chinese Muslims– ordering them not to fast or close shops during Ramazan.

Whether it’s forced abortions, dog slaughter for food, or internet censorship, China’s communist state parallels the draconian regimes of the Islamic world. It’s the same mindset – forcing people into slavery and denying them basic human rights. Eating or refusing to eat is a very fundamental human right. Just like Muslims don’t have a right to impose their Ramazan on others, no authority has the right to pressure them into eating.

Will China listen? Of course not. China never listens; it just does what it has to do, much like Saudi Arabia where Islam is duct-taped around the citizens. Obviously Muslims in the Xinjiang district of China are disturbed over this violation of their religious/ideological right by the state.

The problem also is caused in part by the Muslims’ own intolerance. If they don’t want to eat, that’s all good but closing shops and denying others service or food is not generous or kind of them, or their faith if it teaches them so. The good believer to me is one who continues to practice his personal belief without letting it affect his contribution toward society or the good of his fellow people whatever their faith. That is only how you earn true respect – by spending it on others.

Healthy societies believe in personal freedom. China, like many others, is a sick government, though its people are undoubtedly considered the hardest-working throughout the world. In matters as these, it is left to the people – of all faiths – to come together, stand by each other, and resist the government’s excesses and violation of civil rights.