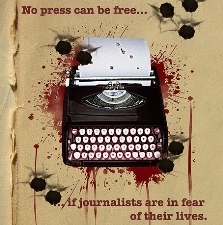 Last month, Pakistan’s judiciary, government, and military teamed up to ban a leading news network – Geo TV – and its associated print publications. The network had blamed Pakistan’s powerful intelligence agency, the ISI, of attacking its famous journalist and anchor Hamid Mir. Mir was shot multiple times after reporting on the role of Pakistan’s military-ISI in the conflict-torn Balochistan region where separatist nationalists are fighting for independence and control of their natural resources.

The life attempt on Mir and similar attacks and assassinations of journalists earlier than his case, provide an example of military dictatorship operating in the cover of democracy in the Pakistan. And although media is considered free in the developed west, the situation is far from ideal. Lizabeth Paulat’s story’s title on Care2, Why is the West Attacking Freedom of the Press?, indicates the need for doing more for press freedom and safety of journalists and media people in various parts of Europe. And stories of similar kind are reported from the United States as well.

Earlier this year, freepress reported that according to Reporters Without Borders, the US went down too no. 46 in global press freedom ranking, its earlier rank being 33, in the year 2013. This is seen as the “most significant” decline of press freedom in America. As an example, the freepress article mentioned cases of James Risen of New York Times and freelance journalist Barrett Brown. Reporters Without Borders expressed deep concern over decline of press freedom in US and UK.