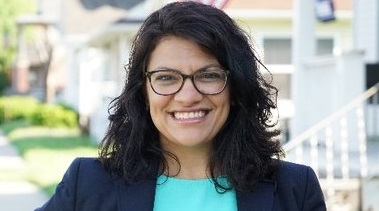 Rashida Tliab, the newly sown-in Democrat congresswoman from Michigan, is a national security risk and by her actions unfit to sit in congress, says petition that asks for her removal.

On January 4th, 2019, a petition was launched by R.L. on the White House’s website demanding that Democrat congresswoman Rashida Tlaib of Michigan is unfit to sit in congress because of her profanity, actions, and rude display; therefore it is just and warranted to remove her immediately from office.

The petition also states that due to her hatred toward the sitting President of U.S., the congresswoman is a national security risk.

Rashida Tlaib, who is of Palestinian descent, is one of the two newly elected Muslim congresswoman in the midterm elections of 2018 (the other being Ilhan Omar from Minnesota). She drew attention on the election night when, instead of waving an American flag, she celebrated her election win with a Palestinian flag.

But it was her angry cursing at President Donald Trump after being sown in a as congressman in the first week of January 2019 that outraged many Americans, particularly conservatives. Tlaib declared: “Because we’re gonna go in there and impeach the motherfucker.”

The petition demanding the removal of Rashida Tlaib for her nasty language and being a potentrial security risk to the United States has gathered more than 61K signatures and Needs 38,420 signatures by February 3, 2019 to get a response from the White House.