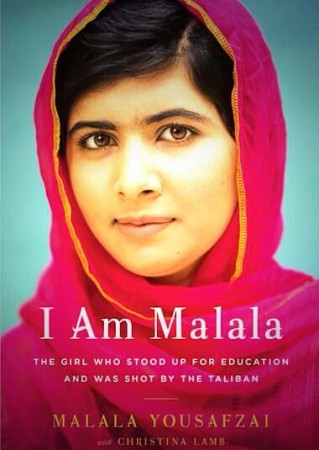 Malala Yousafzai of Swat valley, Pakistan, is a name that has literally become an inspiration for those who believe silence

is the safe way to avoid anger; she proved to the world it is speaking up that defeats danger. Ironically, the authorities in the same province where she comes from are so afraid of danger that they had to cancel Malala’s book promotion event.

After she was shot by terrorists at point blank range for speaking up against their oppression of women in her home town, Malala was moved to the UK under pressure from the west who wanted to save this brave child from the loose and questionable security system of her country.

Since then Malala has become a voice for the oppressed, winning boundless fame and recognition of her courage, including the honor of becoming the youngest nominee for last year’s Nobel Peace Prize. Her autobiography I Am Malala was published in October 2013 and has been reviewed in numerous publications along with Malala’s interview on most popular TV shows like The Daily Show.

A story in today’s New York Times informs that officials at Peshawar University, the leading educational institution in the province, cancelled an event at the Area Study Center which was meant to promote the book. According to the officials as reported in the NYT story, they could not provide the necessary security for the event.

On the one hand, this failure of providing the security, then the open confession of it, shows how the current provincial government has to go a long way to start doing their job; on the other hand, it again highlights Malala’s incredible courage and bravery for she being a helpless child had more courage than those getting paid for doing something they are afraid of though still interested in draining the government’s funds as possible.