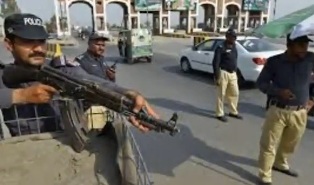 Police in Pakistan, and particularly in Punjab province, is notoriously corrupt and violent toward citizens. But what happened in Model Town, Lahore, earlier this week was more than brutal. In Model Town area of Lahore, Punjab’s capital, police raided the area outside the residence of Dr. Tahir-ul-Qadri’s, leader of the Pakistan Awami Tehreek (PAT), who is an increasingly popular politician emerging as a rival of the current governing party Pakistan Muslim League–N.

The clash between the police and PAT supporters resulted in the killing of 8 people, including two women, all civilians, shot dead at the hands of the police. Police also beat dozens of people leaving them bleeding and injured without trying to negotiate or peacefully manage the conflict.

Dispatch News Desk posted video footage (warning – graphic content) of dead women at the scene of the clash while no emergency or rescue workers were present, leaving to the loved ones to take care of their dead and injured family members.

Meanwhile an outrage has transpired on social media like Twitter and Facebook where the killings are being condemned as an open case of state terrorism targeting its political rivals. An article in Daily Times wrote that civil society has also condemned the police killings as “state terrorism”.

This incident is anything but new since Shahbaz Sharif’s provincial government has long been bashed for involvement in acts of violence against civilians. But the Model Town killings have taken it to new extreme, a point where it has become difficult to distinguish the police from terrorists.