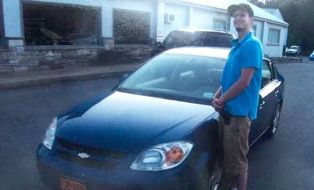 A mother who lost her son to a car crash has been gathering support from people toward the cause of timely awareness against defective cars – something that she believes took the life of her son.

The accident took place in 2 years ago in Dresden, NY, when 21-year-old Michael Sharkey was driving his newly purchased 2006 Chevrolet Cobalt one morning in June 2012. His car hit a rock wall and caught fire. Though he got out of the car with serious burn injuries, he didn’t make it.

Shortly after the incident, Sharkey’s family saw a notice of recall of the same car issued by the company. While the police investigation didn’t seem to have found strong evidence that the defective nature of car led to the car, the victim’s mom keeps asking the important question whether a timely  notification could have saved her son’s life.

“If my son had been told when he bought the car that it was defective, he might still be alive today,” says Michael’s mother Cherie Sharkey on the Care2 petition page whereby she is asking the US Congress to introduce a law that would make it mandatory for all dealerships to immediately inform their would-be customers of any vehicle recalls.

“I started this petition in memory of my son, but also because I don’t want this to happen to anyone else,” wrote Cherie Sharkey whose petition has gathered nearly 25K signatures in support of her cause.

A story on Bloomberg earlier this year related the grief of parents who lost their children to defective cars to the announcement of recall by General Motors Co.