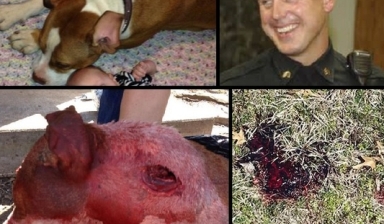 Yesterday’s school shooting in Oregon added to the list of such tragedies and was reported nationwide. What didn’t make it to every print and web news outlet was the unnecessary killing of a pet dog in Oklahoma. The killer of this victim is a cop and he shot her only because she got a chance to get out of her house and “roam” the neighborhood.

The story was posted on the popular activism site Change.org, identifying the cop as Brice Woolley who arrived before the animal control staff and instead of helping, just did what a bad cop would do in such a situation – shot the dog and say it was necessary because the dog was dangerous.

Why are such cops so reckless and irresponsible? The reason is obvious – there is nobody to make them accountable. If a civilian kills or hurts somebody, he/she is made accountable by law enforcement. When law enforcers kill, they often tend to act as a team and push such cases under the rug, playing monkey business on paper and making the victim responsible.

Activists do need to raise a voice Cali’s murder won’t go in vain and the strict accountability should be made of her shooter before he destroys another family.

One of the problems with gun control proponents is that they have no answer to the question why should family dogs not be protected against this epidemic of loose cops shooting harmless dogs and traumatizing their families by taking away guns from police. If it is guns that kill, then cops too need to be made armless because the incidents involving them hurting and killing family pets are at epidemic proportions.