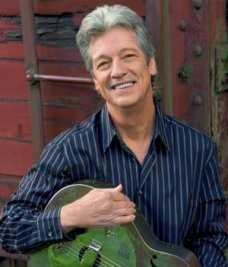 Multi-award winning Bluesman John Hammond remains one of the world’s premier acoustic blues artists. A Blues Hall Of Fame inductee with more than 33 albums to date, John Hammond is one of a handful of artists who can say they have been steadily working and recording for 50 plus years.  One of the most awarded musicians around, John Hammond won a GRAMMY for his performance on Blues Explosion in 1985 and has a total of eight GRAMMY nominations, most recently for Album of the Year for his 2010 release “Rough & Tough”. In 2011, John won the Blues Music Award for Acoustic Artist Of The Year, giving him a total of eight Blues Music Awards and another 10 nominations.

Hammond has recorded or performed with Jimi Hendrix, Eric Clapton, Muddy Waters, Howlin’ Wolf, Duane Allman. JJ Cale, Tom Waits, Dr. John and many more. In June of 2008, John performed his 4,000th date as a Rosebud artist and continues to tour worldwide on an annual basis.

“John’s sound is so compelling, complete, symmetrical and soulful with just his voice, guitar and harmonica, it is at first impossible to imagine improving it… He’s a great force of nature. John sounds like a big train coming. He chops them all down.” – Tom Waits

“John Hammond is a master… He is a virtuoso.  A conjurer.  A modernist.  John is in a very small circle of men with a guitar and a harmonica.  Jimmy Reed, Howlin’ Wolf, Bob Dylan.” – T Bone Burnett

“… a blues legend with a voice like Robert Johnson’s and a demeanor that belies his tear-it-up might before an audience.” – The New York Times

Tickets for this seated show will go on sale this Friday, June 13 at 10AM. Tickets will be available for purchase at the Ponte Vedra Concert Hall and St. Augustine Amphitheatre box offices, findmytix.com, and all Ticketmaster outlets.