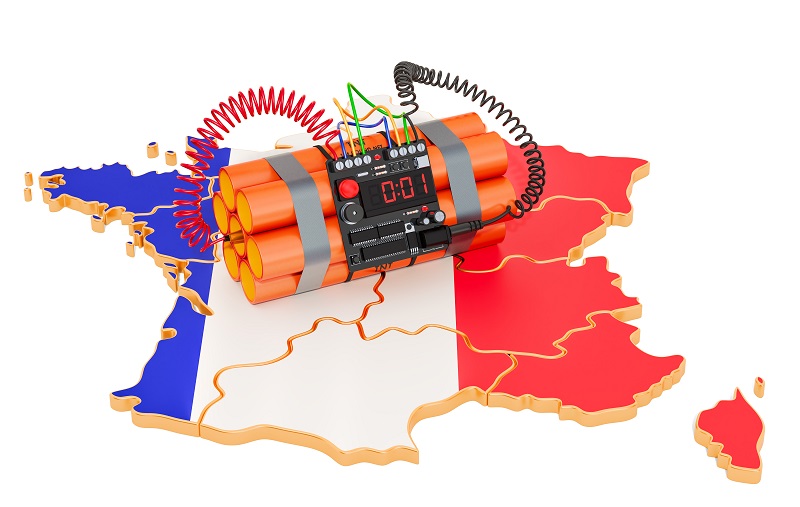 With the barbaric slaughter of a secular French teacher by a young Muslim refugee, the threat of Islamic terrorism looms large over France and Europe in general. And the citizens at risk of this threat have to thank the liberal governments and their globalist organizations for it.

History teacher Samuel Paty was murdered via beheading in front of his school on Friday by an 18-year-old Muslim male who was living in France as a refugee from Chechnya along with his family. Paty had discussed the cartoons of Islam’s prophet Muhammad in his class on secularism and asked the Muslim students to leave if they wanted to since he’d be showing the cartoons published by Charlie Hebod in 2015, for which the satire magazine also was terrorized by radical Muslims in the country. Muslims then networked and labeled him a blasphemer and ultimately murdered him.

Since Muslims adhere to the Islamic law of “death for blasphemers” and insulting Muhammad or other scared figures in Islam is considered a blasphemy, drawing, publishing, or showing any images of Muhammad is considered blasphemy and punishable by death in the Islamic law. That is why not only Muslim refugees and “naturalized” citizens have been reported killing native non-Muslims in the host country, but international Muslim students too have committed such murders—just like the murder of John Dowling, an English teacher who was killed by a Pakistani student named Ali.

Equally complicit in protecting and supporting Islamic terrorism in the west are the mainstream media mobs that turn to a policy of concealing identities when the terrorist is a Muslim immigrant, for example in the case of the Chechan teen terrorist who murdered Samuel Paty.

The United Nations and the European Union made immigration of Muslims from poor and backward countries to the west their top agenda in order to alter the demographics and permanently subdue the native nationalist and conservative population. Mosques and Muslim NGOs as well as non-Muslim organizations working toward the same goal create networks of organizing, sheltering, nurturing, and training Islamic terrorists that come under the pretense of refugees, asylees, and other assigned roles. The liberal governments, like the current French government and the neighboring German government help these Islamic terrorists.

When incidents like Paty’s murder spark an outrage among the natives, the liberals put on a fake persona of commitment to action against the terrorists when deep down they are all the same entity. France, like several other European countries, is falling down under the globalist-liberal agenda of importing Islamic terror to enslave native population. It is left to the citizens of these lands to decide what they are going to do about this murderous scheme.