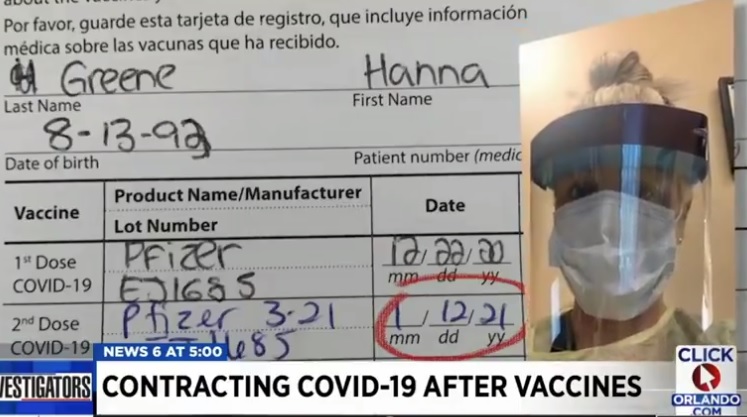 Despite the most aggressive attempts of sold-out media mobs to promote the COVID vaccine, the rising number of people testing positive after taking the shot are making news. And it is making the vaccine propagandists dizzy. In new reports, dozens of Florida people who got fully vaccinated against COVID have tested positive for COVID.

Termed laughably as “breakthrough cases” by the vaccine-dealers, the COVID cases in fully vaccinated people in Florida were reported by News 6. See the news video below.

These numbers are building up quickly as the so-called breakthrough cases keep getting reported from different parts of the country daily. On Tuesday, over 100 people in Washington State were reported to have tested positive despite being fully vaccinated. The pro-vaccine establishment doctors had to rush to the vaccine’s defense and falsely claim that despite getting COVID after vaccination, these people have a less serious form of COVID – something that lacks scientific evidence.

Prior to the cases from Washington, 89 vaccinated people in Minneapolis were reported to have tested positive for COVID 19. The so-called “experts” are featured in pharma-crony media stories repeating the lie that the vaccine is effective; the only problem is the lack of vaccines’ effectiveness is so obvious that they have to change the claim of effectiveness from something that prevents COVID to just reducing its severity, and even there the experts are unable to offer evidence.

It is worth mentioning that the reported breakthrough cases are likely just the tip of the lurking iceberg of the COVID vaccine failure. State agencies responsible for reporting the cases may be hiding the numbers to save the face of the COVID vaccines. An example is Oregon’s breakthrough cases. The state reported in February that four cases of vaccinated people testing positive have been reported. But since then the health authority of the state has gone silent. Fox News reported:

Though the Oregon Health Authority announced last month that Oregon may be the first state to report breakthrough cases, with four in mid-February, the agency couldn’t respond directly to FOX 12’s question about how many cases there had been since then.

In addition, there is no certainty about the number of vaccinated people that are regularly tested for COVID 19. If a log is kept of all the vaccinated people ad their weekly COVID test reports as against the same for unvaccinated people, we could have a somewhat scientific comparison of the two groups. But then the house of lies built by the fake news media and the medical mafia would collapse like never before. And that is certainly not what those running the whole show want.