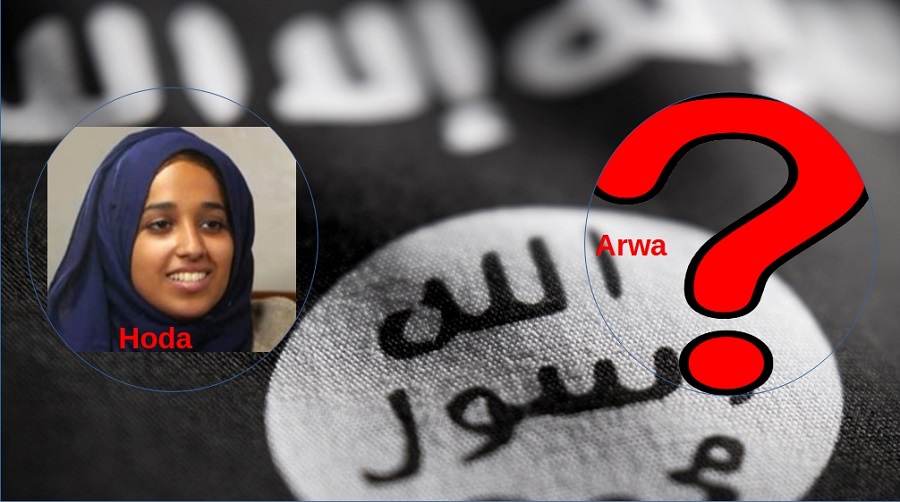 Guess who got arrested for trying to leave America to join ISIS? The older sister of infamous ISIS-terrorist Hoda Muthana, Arwa Muthana while trying to flee America and join ISIS.

The 29-year-old Arwa Muthana and her husband, both radical Muslims, were charged in Manhattan with conspiracy to support a foreign terrorist organization.

Arwa’s younger sister Hoda Muthana has been in news for the past few years after she left and served ISIS in Syria, marrying an ISIS terrorist, then wanted to return to US to join her family in Alabama. But the Trump administration barred her from entering US again and a federal court also ruled that she was not allowed to return because she was not a US citizen. While serving ISIS, Hoda in 2015 had called publicly for spilling American blood.

According to details of the arrest, Arwa and her husband, Abdullah/James Bradley (whom she married just a couple of months ago), traveled by bus from Alabama to New York to leave the country for joining ISIS and wage war against America. An undercover officer was watching them as he facilitated their travel plan. The couple was arrested at a seaport in New Jersey as they tried to leave via a cargo ship.

Awra Muthana and her husband face a maximum of 20 years in prison according to the Department of Justice press release posted yesterday. The release clarifies:

The maximum potential sentences in this case are prescribed by Congress and are provided here for informational purposes only, as any sentencing of the defendants will be determined by a judge.

The mainstream media has reported timidly on the story of the arrest of Arwa Muthana and her husband. CNN, New York Times, Washington Post, and many other leftist propaganda outlets have not yet reported on the story. The ones that did report have avoived any mention of words “Islamic terror” or “Muslim couple” or “radical Islamists” in their headlines and the contents of their stories. Instead, they have pharsed their titles using “US Couple” or “American Couple” to refer to the radical Islamic terrorists, just like The Strait Times story. Similarly, Newsweek referred Muthana and Bradley simply as “married couple” in their story title.

The leftist media stories have also excluded any mention of the family relationship between Arwa and Hoda. None of the stories posted so far carries pictures of the two terrorists, any links to their social media pages, or other material that shows more about them. Apparently, the media doesn’t seem to be very interested in these two terrorists. And we can imagine why.