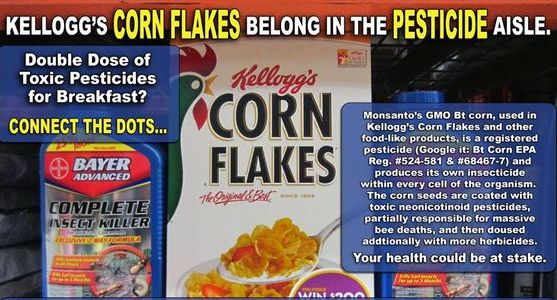 World’s leading breakfast cereal maker Kellogg Co. was in the news a few months ago for its decision to slash employment on account of notable drop in sales of its cereals.

“We sent a box of Froot Loops to a lab for genetic testing and found the corn and soy are 100% Roundup Ready GMO,” reads the description of the petition on Care2. The petition reminds readers that GMOs are sprayed with Roundup (glyphosate), which is a toxic weed killer and is absorbed by the plant sprayed with it. This gives rise to serious public health worries.

Even worse, the Food and Drug Administration (FDA) has been repeatedly urged by the public and activists to make it necessary for manufacturers to label their products as GMO or otherwise but the federal agency has shown no interest in heeding this public demand.

The petition by GMO Free USA has been signed by more than 2000 people so far and has reached its goal of 2000 signatures, but people continue to add their names to it and ask for GMO-free food.