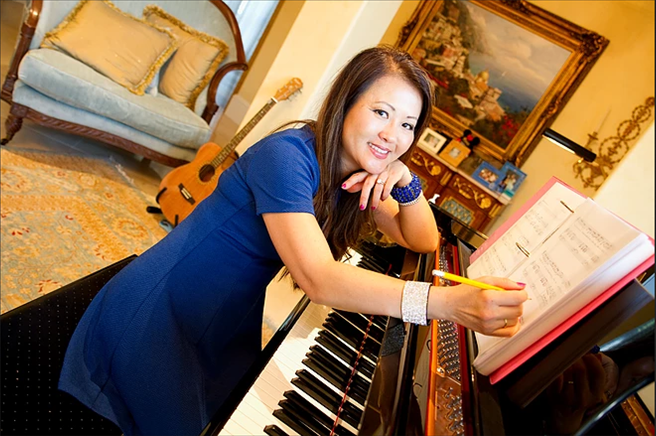 Joyce Bartholomew is a celebrity whose talent springs from the love of music and the love of God. Hailing from California, Joyce sings in faith and promotes Christian spiritual values via her songs. She also writes songs and introduces herself as a worshiper of Jesus, a mother, and a wife as well as a long-time pro-lifer. I had the pleasure of chatting with Joyce via email about her art and views on contemporary social issues.

Ernest: Hello Joyce and thanks for taking the time for this chat. I’d first like to ask you what kind of childhood dreams and interests you had, especially ones relating your faith or belief system? And what was the role of music in your faith-related education?

Joyce: I always wanted to be an actress because I was singing on stage since the age of 8 in California. I have studied drama extensively too, so this still may be in the future with my production company. I also considered becoming a veterinarian because I love animals, especially dogs. I always wanted to make a difference for Christ somehow, someway. I had accepted Christ at 8 years old after church service one Sunday, and I was serious about my faith, although not perfect. I have always sung at church, and I play piano as well. But piano is not my strength so I have reserved that for music videos where it can be edited and not live, and for working on songs at home.

Ernest: When did you first sing for an audience? Please tell a little about that memory.

Joyce: At the age of 8 years old, I was the lead in many community theater shows in Los Angeles. I never expected to love it so much, but it is just a passion of mine. My parents were stunned that I could sing. My mother was a gifted singer when she was little, but never pursued it. I decided to become a singer when I became the National Spokesperson for Pre-Born! just eight years ago, in 2011. I felt called to write and sing my own songs because I also had something to say that was from my deepest heart. And people like to know what drives you and what you are all about, instead of just covering other people’s songs.

Ernest: What team(s) do you create songs with, and do you always sing solo?

Joyce: I have a Nashville team. They have moved to different places now. The lyrics are often begun with me, and I get cowriters to help rewrite it to make it better. Infrequently another writer has the inspiration and we jump off of their initial lyrics and rewrite it. Composing comes from the former teenage Christian alternative rock stars, called Justifide. They produce now. Yes, I always sing solo with the backup band singing background vocals sometimes, or just an instrumental track if I travel alone because it is costly to take everyone. I did write Madness as a duet, from my second album, The Unveiling, but I will probably sing that solo as well, due to the cost of bringing someone with me to sing their part.

Ernest: Have there been any singing experiences in your life and career that were overwhelmingly emotional or spirited?

Joyce: All of the singing for Pre-Born! has been spiritual. When I sang the National Anthem three times in a row in front of tens of thousands of people each time, it was such an honor and I felt such power from the Holy Spirit take over as I sang! Also, at SBA List’s 10th annual gala, I sang What Was Your Name, my first prolife song, in front of VP Mike Pence (he was in the green room but could hear), Kelly Ann Conway, Lila Rose, president of a major prolife organization, Alveda King (Martin Luther King Jr.’s niece), and many senators and congressman, and people responded with such emotion. I was so honored to be in their presence that day. And the honor of singing two years in a row at The National Prayer Service for March For Life was incredibly powerful and I was so honored there as well.

Ernest: Spirituality is traditionally considered an enemy of social evils. What evils you see in society today that you think need to be addressed via music of faith?

Ernest: In contemporary liberal societies, mainly in the west, Christian faith is frequently under attack. Have you experienced any negative or intimidating responses to your work or others you know in this regard?

Joyce: Yes, definitely, especially on social media for being prolife. I have arguments with people online and they are nasty, but I will defend the babies and I end up blocking them. I am never rude either, but they often are. I used to cry 8 years ago, but God has built my faith and made me stronger.

Joyce: One of my cowriters sang his prolife song 25 years ago and someone broke his car windows at the event. He gets online hatred as well, but he is strong in Christ too. Google banned my first pro-life song’s video, which was my first music video ever produced, and said I illegally had bots making it viral. It was only at 30K views or so at that time, which is hardly enormous for YouTube, and I hired a lawyer, Charles Limandri, who represents David Daleiden, who exposed Planned Parenthood’s illegal selling of fetal baby body parts. I sued Google and YouTube for defamation because they lied about my character, which is everything to a volunteer Christian artist. This went on for three years, and we ultimately lost, but it sparked many groups to fight censorship against conservatives, Christians, and especially pro-lifers. So I am happy about that, even though it was a loss for me at that time. A Christian marketing group said they had never seen anything like this before me.

Ernest: Have you been offered any opportunities in music, and in life, that you declined because of your faith or spirituality?

Joyce: Yes, when I was younger and just got married, I had many offers to do ungodly acting roles for film, particularly, and I would decline based on content or language. It was not easy to decline, but I have no regrets and I am glad that I did.

Ernest: And lastly, please tell a bit about your family and how do they add to the quality of your musical work?

Joyce: My husband is very supportive and finances everything that I do, because I volunteer. I could not do this without his support at this time. He is very godly and has asked me not to compromise my faith, to have integrity, and to do things that bring people somehow closer to Christ. He has really been an influence in my career choices and path overall. He also took care of the kids while working very very hard during the early years of my traveling to sing for Pre-Born! He has been very supportive of what Pre-Born! does and this has been instrumental in my ability to help them grow!

Ernest: Thanks again Joyce for taking time for this chat and I wish you the best ahead in your work.

Joyce: Thank you for the opportunity! I appreciate all your help too!

Readers can see more of Joyce’s work at her website https://www.joyceimbartholomew.com/.