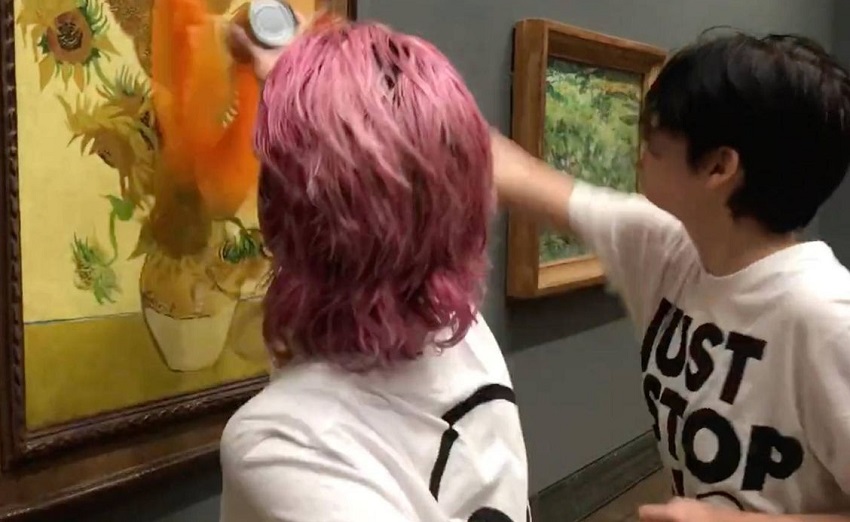 The mental illness of liberalism under the influence of fake climate science has been attacking artwork in museums and galleries in different countries. So what’s the rationale behind this display of retardation?

The recent incidents of vandalizing world-famous and expensive artwork include throwing of food at paintings and the so-called climate activists gluing their hands to famous paintings – the latter incident happening early this month at the National Gallery of Victoria in Melbourne. News anchor Steve Price stumped one of the climate protesters with the question why he didn’t glue his hand to a power station instead of Picasso’s 1951 painting Massacre in Korea.

In another incident, two eco mobsters entered Germany’s Potsdam’s Barberini museum and threw mashed potatoes at Claude Monet’s painting Les Meules – which is priced at for $110 million – before gluing themselves to the museum’s floor. Van Gogh’s Sunflowers had already been attacked with tomato soup in the National Gallery in London.

These organized attacks by liberal lunatics targeting famous pieces of artwork have been defended by the liberal-run propaganda outlets like MSNBC where some cheap-to-hire mouthpiece asked people to “stop condemning the art vandals and start listening to them.”

While these scenes of mentally ill and aggressive people attacking artwork are direct concerns of commentary, the fact that nobody at these museums and galleries seriously makes an effort to stop these vandals is itself a sad scene. People stand by and make videos with their phones but let the retards do the damage – a living example of bystander apathy.