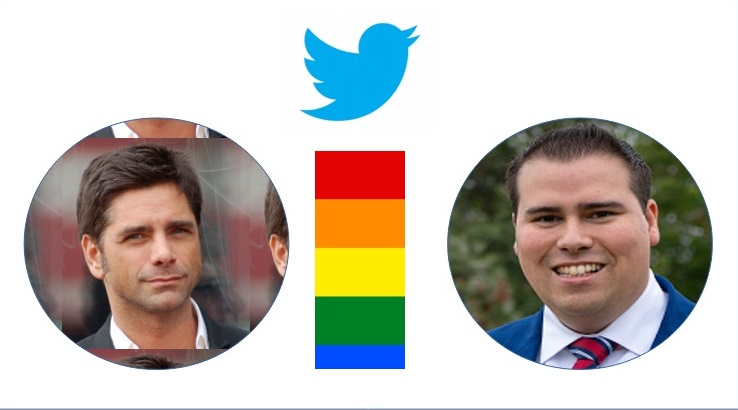 Recently John Stamos – who played Jesse in the comedy show Full House – snapped at Republican politician Omar Navarro of California after Navarro on Twitter expressed his frustration with Disney’s LGBT agenda. Stamos tried to make a point, but ended up making a fool of himself.

In his May 30th tweet, Navaroo commented on Disney’s new movie Cruella:

The new Disney Cruella with Emma Stone just ruined my childhood with an openly flamboyant gay in the movie. Disney persist shoving the LGBT agenda down our throat.

John Stamos somehow saw the tweet by Navarro, likely because these days Stamos is not getting much work in Hollywood and has lots of free time to spend on social media, and retorted thus: 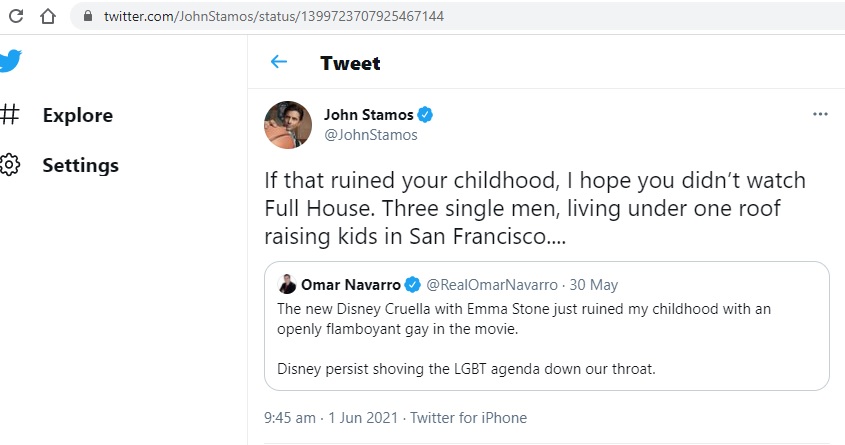 Since I grew up with Full House in the 80s and 90s, and all characters of the show are close to my heart, my thought is the actor John Stamos is an idiot. And he showed it by bringing up Full House when the show did not advocate gay/LGBT causes. For the characters and premise, the three single men were not so single after all. Jesse (John Stamos) had got a girlfriend, Becky (Lori Loughlin), already in the third season, and in the next season they get married and by the end of the show (in 8th season), they are raising two boys of their own. The other two single guys – Danny (Bob Saget) and Joey (Dave Coulier) – are always dating women. And as the three Tanner girls grow up over the seasons, they are also shown straight as an arrow; same goes for the neighbor girl Kimi (Andrea Barber). Where does Full House advocate or endorse LGBT culture? Can Stamos explain?

There have been moments in the show when I felt the show was a little overly sexualized for being a children’s show but never did I get any hints that the guys or girls had anything gay to their characters or that the show endorsed gay lifestyle. It was a completely normal family sitcom. Its reference in Stamos’ reaction to Navarro is lame and outright idiotic.

As for the story on leftist propaganda platform Yahoo, it included equally or even more idiotic tweets in support of Stamos to imply Full House had some gay moments. These people could sure see anything, including straight sex scenes, as gay because they are simply projecting their wishful thinking and political agenda on the show’s scenes. I wonder how many of them even watched the show and can explain their views with examples from the show.

One tweet included from a supporter of Stamos pointed to Navarro’s 2019 arrest over stalking charges following a complaint by his ex, DeAnna Lorraine Tesoriero. It’s true that Navarror was charged and sentenced to six months in prison. But what the Yahoo story didn’t include is of course the criminal record of John Stamos. Yes, before Navarror, it was none else but Uncle Jesse who was arrested for dangerous drunk driving. But instead of getting 6 months in jail, which is the maximum penalty for the crime, John Stamos got 3 years probation. After all, in the leftist law enforcement machinery of California, you get away with crimes if you are a lefty Hollywood darling.

The lunacy and bad character of John Stamos in real life does not ruin my childhood that was enriched with Full House, Perfect Strangers, and other wonderful shows. Stamos stopped being important soon as Full House ended, because he wasn’t Uncle Jesse anymore. Now he’s just another over-the-hill lefty lunatic who simple doesn’t matter.