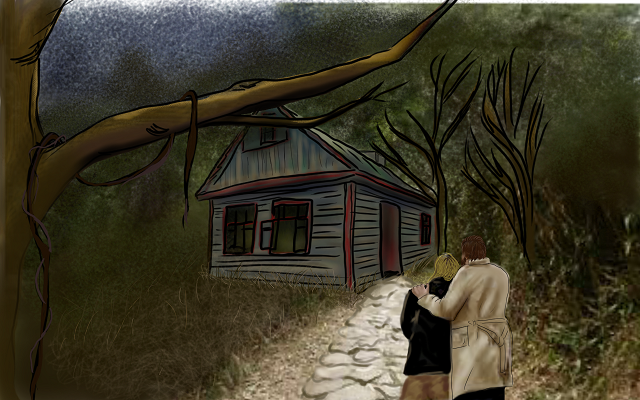 They looked at the old wooden cottage in front of them in the hills. It was dark and the hills were quiet and cold.

“Let’s go inside,” said the man and just as he stepped ahead, the woman held his arm.

“Wait,” she said, looking a little worried. “You sure it’ll be safe?”

“It is late and there is no sign of your dog,” he said, looking around. “I agreed to help you but we have walked deep into the forest. If we do not find somewhere warm fast, apart from the obvious exposure to hypothermia, the dangers are very real. We need to wait until daybreak to make our way back, so let’s proceed with caution and see if anybody is home.” Twigs cracked under their feet. It was impossible to be silent.

“Hello! Anybody home,” he shouted and with his clenched large, stubby but long fingers banged on the door.

“The house seems empty,” he muttered. She seized his arm with a tight grip, shivering and peered at the door. He grabbed hold of the door handle. Suddenly a rasping and scraping sound echoed the forest. He braced himself and lost his grip on the door, causing them to almost tumble over each other. “What the hell!” he shouted.

“What happened?” asked the woman, visibly shaken, refocusing her eyes on the man and slowly realizing that he was wondering the same thing.  She grabbed the handle herself, and twisted it.

As they tried to regain their footing and composure, the sound came again. A, long low sound that reverberated echoing through the hills, making the fast-coming darkness even more terrifying. The sound reminds you of claws on a blackboard with a mix of a pterodactyl scream and steel breaking, while dragging a rusty chain across the side of a boat.

“Wait a minute,” said the man, thinking. “If that was an earthquake, it might not be safe inside.”

“Well you said it’s going to get too cold out here, and I’d feel safer inside. Besides, I don’t think that was an earthquake. Earthquakes don’t make that kind of noise.” She finished her justification from inside the dark cabin, sliding her palm along the inside wall to find a light switch, but getting splinters instead. “Ouch! Dammit. Splinters.”

The man came in and both of them began feeling their way around gingerly. Once inside, it wasn’t any better. Now admittedly they had a roof and walls to protect them. However, it was an old wooden cabin, without a fire , so it was just as cold inside as it was outside. There were silky cobwebs scattered around that first room—some with inhabitants, some without. Strings stuck to their hands leaving them feeling like they’d slipped on an unwanted organic glove.

Fuck it, he thought as he berated himself in his mind. All this for a chance at getting laid!

The woman was the first to reach a light switch. There was the unmistakable sound of a switch flipping , and what followed was… odd. The lights turned on. It illuminated the thin shroud of dust their steps had disturbed into flight and the internals of long forgotten place. As their eyes became accustomed to the gloom of the interior and they were more able to take inventory of the small haven, it looked to them as if no one actually ever had used the place.

This house looked abandoned, there are cobwebs everywhere, and no one answered when we called. Why was there power in this house? Just lucky, he thought.

“There are a few more hours until dawn,” He said. “It doesn’t look like anyone’s here, and there’s light so I’m not going to complain.”

“Does it matter if I’m sure or not? We don’t have any other choice in this weather.”

With the lights on, the walking was easier but the struggle going on in each of their minds was left unchanged. Somehow, a strange seemingly abandoned house in the woods doesn’t get familiar by flipping a switch.

So they explored. Together at first, and then, as one thing caught an eye, they drifted apart without noticing the other’s absence. The man veered towards the kitchen looking for anything consumable and the woman continued down the hall she found the switch on—light so often leads to more light, they say.

At the end of the hall the woman found a sole open doorway. She couldn’t see into the room; the door opened inwards and the little space she could see was cordoned off by a wall.

She took the turn, one fateful step at a time. Her hand rested on the door jam, dusty and crude beneath her silky cobwebbed fingers. Her feet scraped the floor casting more veil to jettison into the abyss. Her eyes glanced around the rim of the room and settled on the far corner. A stained, dented thing that may have been a mattress in an earlier life laid there. A strange mass rested on top. At first, she didn’t notice it, but the rhythmic rise and fall and the even fog that came with it drew her attention.

The woman approached cautiously, her heart in her throat, her hands shaking. The mass in the middle of the bed moved and let out a low whine. Could it be? Taking a deep breath, she stepped closer. The creature emitted a low growl, but when it looked up at her, the eyes, darkened with pain, lit up with recognition. It was her dog.  He was in terrible pain and she noticed multiple flesh wounds on his body and areas where the fur was torn away, but his tail managed a feeble wag. He knew she would help him, no matter what.

She called for the man, sobbing as he looked at the mangled mass that was once her beloved pet. “Can we save him?’ The man looked grim. “Get some water and some rags or towels. She did so and they both worked meticulously to clean the dog’s many wounds and stop the bleeding. During it all, the dog licked her hand to show he trusted her to do right by him. Eventually, his breathing went from labored to even sounding. He had fallen asleep. She lay next to her dog, her arm over him to show she was there to protect him through the night until morning when she could get him to a veterinarian for proper treatment.

The man saw them, both lying sound asleep, and went off to find his own place to bed down for the night.

One thought on “Interactale 11 – Shelter”