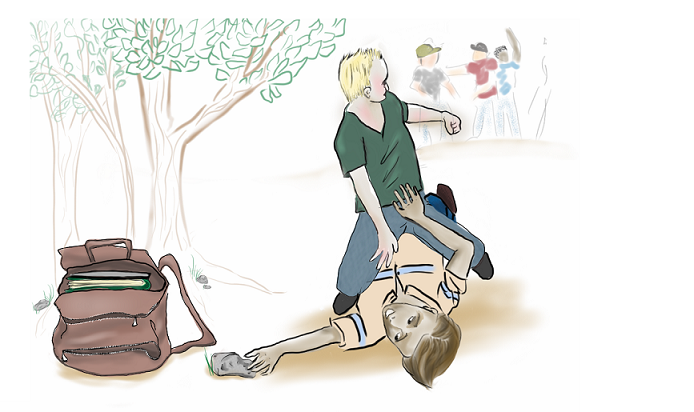 “Gimme my bag!” Steve tried to yell at the group of four, the Bully Boys as they were called at the school. Mitch, the oldest and biggest of the gang looked mockingly at Steve, who was trying hard not to show his fear, and then at his gang. Then he laughed aloud and said, “Sure chicken, here’s your bag.” And he threw Steve’s bag with force, farthest from where they were standing in the football ground.

The bully boys fanned out between the bag and Steve so that he’d have to walk between them or avoid them quite obviously. Steve kept his eyes on the bag, considering whether to go through or around, but not moving. Gym clothes, a few books, and his lunch were there, sitting in the bag in the grass. Did he really need them?  Suppose he reported them stolen, and by whom?

“Don’t you want your bag?” asked Mitch, turning sideways and flourishing his arm toward it.

“Well yeah,” he choked out, “that’s why I asked you to give it back.” He said this without looking at Mitch, condescendingly, drawing courage from his own stillness, but planning two escape routes, one right past his bag so he could pick it up on the way and the other in the opposite direction. But he had more to say first.

“You apparently didn’t understand me.  It’s right behind you if you want to try again,” Steve said, shaking a little.

“You ballsy little fuck, you can get it yourself.”

Steve attempted to run for it, but before he could grab it, Mitch tackled him and pinned him to the ground.  Smashing dirt in Steve’s face he said tauntingly, “You didn’t try hard enough, you little sissy!”

Steve was choking and trying to get air into his lungs. The other three boys stood around laughing. “What are you going to do about it now?” Mitch continued his taunts.

Suddenly, Steve was angrier than he had ever been. He was tired of Mitch and the Bully Boys and everyone like them.

Without thinking that Mitch was bigger than him and had three friends to defend him, Steve freed his right hand and searched the dirt until he found a rock.  Looking up at Mitch’s sneering face and mean yellow eyes, He smashed the rock full force into Mitch’s face.

What happened next, surprised him.

The king bully of the schoolyard shrieked like a five-year-old schoolgirl who had her pony tail yanked hard enough to both surprise and scare her at the same time. The three junior bullies just stood there in what could only be seen as complete and utter shock, amazement, and awe as they watched their self-imposed fearless leader cry and scream as blood flowed down his face.

Steve scrambled to his feet, holding the blood-covered rock in his right hand, looking stunned himself. He quickly regained his senses, taking a step toward Mitch, hefting the rock higher as he closed the distance between him and the leader of the Bully Boys. Thinking as to what he might do, Steve started listing the possibilities in his head: hit him again with the rock, beat him senseless for every time that he had been bullied, make him hit each of the other three with the the rock, take them all to the office and call the police.

Perhaps he could take control of the gang and instead of bullying others, he would have the bullies help others. Oh that would be rich, he thought.

No, he quickly concluded that none of these thoughts were going to work, or work for long.

Instead, still holding the rock, he found enough courage to speak up in a shaky but musty voice, “Ok, which of your bully friends are going to fetch my bag?” They peered into each other’s faces but with little response. Steve lifted the stone a little higher. Mitch covered his bloody face shouted, “You heard him. Go get his bag!”

His so-called friends turned and ran, but not to get the bag, and just kept running, shouting, “You deal with it!”

Steve said, “I don’t need this stone, you jack-ass.” And he threw the stone away. “Look at yourself and what you made me do. Go and run away like your friends.”

Mitch just sat there sniffing with blood running into the collier of his white shirt. “I hate you!” he shouted.

“My mother will get a beating now from my dad trying to mother me.” Steve said, his eyes bulging. “What kind of family do you go home to?”

Steve watched as Mitch’s eyes began to water at his pointed insult, and before Steve could continue his barrage, Mitch ran in the direction of their classroom. Steve turned to get his bag and found himself crashing from the adrenaline rush. Picking up his bag, he half strutted half stumbled to center field and plopped with a great cloud of dust announcing his arrival.

“Well…” Steve took a deep inhale of breath, “That went better than expected.” Slowly, Steve sprawled out on the field using his bag as a pillow. His head had all at once become very heavy. Closing his eyes, Steve looked out into the dark depths behind his eyelids to a world in which he no longer worried about his walk between classes or whether he was going to be able to eat that day.

Just then a voice, high-pitched and filled with an intense rage, rang out across the field.

Steve sat up and glanced around, his eyes acclimating to the sudden burst of reality. The Principal of the school was stomping her way toward him with the bloody king and the school resource officer in tow.

“Stand up! Who do you think you are! Look at what…”

Steve shouldered his bag and started pushing himself off the ground.

2 thoughts on “Interactale 10 – One Wonderful Day”