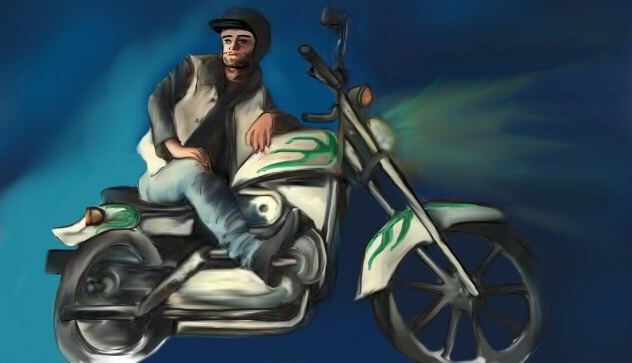 Chance sat astride his Harley, the green-flamed beast, with the thunderous python pipes roaring in his ears. He was at crossroads. He was torn in which direction to go—left toward home, which was no more than an empty shell, or right for the open road that beckoned, like some eternal lady of the night that demanded that you pay her the respect, courtesy and attention of traveling her lone lane to the edge of nowhere; like the mistress that she was.

Chance of course was just a nickname that he had picked-up along the way. He used to be the happy-go-lucky kind of guy, always taking chances, the kind that either killed you or made you famous. Up to this point, it was chance that made him lucky. Or was it being lucky by chance? Damned if he knew! Chance had taken one of those damn chances the wrong kind. Yep, he thought sullenly, the day life had ended; a day not so long ago that left him reeling; physically and emotionally drained, ready to give up on life. Here he was at this crossroads of life or a gateway to another world.

He opted for the open highway, the need to feel the rush of wind in his face, the surge as he raced up through the gears and then let the horses run with every bit of power that the green beast could muster. Damn, Chance thought as he passed 80 mph, why did that memory of our last conversation provoke such a tug at the ole heart strings? What do they call it in psychology, an anniversary date? No. What the fuck is it? He went on flying down the road.

Finally it came to him almost as if was an epiphany. It is called the power of association, Chance chided himself. Where will this dark chance take me?

Chance felt that moment swell in his conscious like the stale gas that fills a balloon. That last dinner, the last time Chance heard her voice, and the time she uttered the famous last words. Chance, on his knee begging for fealty, clothed in the silken armor that directed such occasions, thought he knew the answer to his question. Thought.

“No, I will not.” She had let only a slight intake of sharp air betray her intentions before she released her decapitating words.

Chance lifted the visor of his helmet, but nothing seemed to help. The pain that radiated from the pit of his stomach was far too close to the pain he felt that night. Too chilling. Too much like suffocating with an 80 mile an hour wind forcing itself down your throat. Reliving the memory over and over again was something he swore he wouldn’t do. But here he was—gasping for breath with the world of air in front of him.

Chance continued his reckless tour to nowhere. The speed of the motorcycle and the freedom it gave him was an intoxicating feeling.  He could go anywhere he wanted. There was nothing and no one to hold him back. Maybe she had done him a favor by refusing his offer for marriage. Maybe if she said yes, he would be doomed to a life of normalcy. The house, the family, a dead-end job, kids to support. Maybe her refusal had been a gift in disguise. Now he was free to roam. He had his whole life in front of him. The options were endless. He was so lost in thought, he did not see the other car approaching. Nor did he realize he had drifted over into its path. Chance realized this all too late. He felt the impact, felt the bike go out from under him, saw briefly the horrified faces staring at him through a cracked windshield. He hit the ground with a thud and mercifully, everything went black.

Flashing red and blue lights and sirens cut through the wind blowing over the road; photos of a grey tire mark printed in one straight line over the bonnet of the car were taken.

“What the fuck just happened?” said the driver.

“You don’t know?” said the police officer in charge.

“Well, the bike went from the opposite side of the road to this side and over my car!” The police let the couple sit a while and then helped them out of the car, unharmed.

“Is the driver dead or alive?” said the man. They turned to see the bike that had gone flying into a ditch. The police and the ambulance team began looking for the driver.

“There is no one here,” said a copper, “no driver, just a bike and a helmet.”

After a breathalyzer test as standard procedure, the ambulance drove the couple to the local hospital for signs of aftershock or any unseen injuries.

“Scout the whole of the area,” said the police officer. But there were no signs of footprints or abduction—nothing.

“What’s that?” said a copper to the police officer, who sharply turned to the young copper, who pointed with his nose. Muddy water splashed as someone stood up and fell back into it, laughing hysterically.

They walked to the ditch and stood over it, gazing at the man who continued laughing.

“Hi there!” he eventually said, still lying in the mud.

“Are you okay?” asked the older officer as he walked around the ditch squishing through the mud with his waterproof boots. He turned to the young copper and said, “Call another ambulance.”

“I dunno. I’m a little sore, but…” said Chance. He sat up and splashed the water with his hands.

He started to get back to his feet and the old officer yelled at him, “Hold on there! You could be seriously injured.” Chance sat for a moment, thinking about everything. He then started to get up again.

“I SAID HOLD ON THERE!” yelled the officer in charge, instinctively moving his hand to the butt of his pistol, but realizing there was no call for it.

Chance gave him a blank stare for a moment and then slowly said, “Didn’t I just stand up and then sit back down?” He thought a few moments longer, ignoring the uhs and wells that came from the officers.  He shook his head and moved his arms and legs around a little. “Thanks for worrying about me, but I’m fine. Do you know where my bike is?”

The young cop pointed to the ditch and the old one pushed his arm down, but it was too late. Chance walked over to his bike, shook his head, picked his helmet and put it back on, righted and mounted the bike, rolled it back and forth a little, and then rode away from the officers who were yelling at him to stop. Somehow, his misery stayed with them in the ditch.