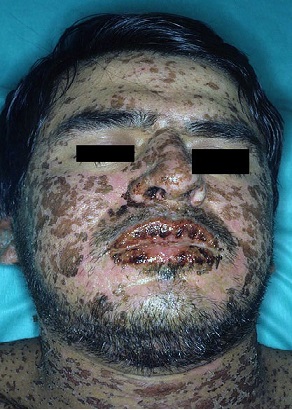 One of the really scary conditions of skin in both children and adults—the Stevens–Johnson Syndrome (SJS)—is related to use of certain drugs, but its connection to vaccination is tucked under the rug by the propaganda mainstream media as well as medical mafia.

(SJS) is characterized by fever, fatigue, and a serious skin rash that develops into lesions—a scary-looking disorder that hurts the eyes much as it hurts the body. The Mayo Clinic page of the disorder lists the causes of SJS and that include some pain-killers, antibiotics, and other medications as well as other infections that lead to SJS. But one thing this and other pages notably exclude vaccination.

Is there really no connection?

Aside from social media posts of parents reporting incidence of SJS following vaccination of their children, scientific studies have also been published pointing to vaccines as one of the causes of SJS. Included below are just a few of the studies that a quick Google search gives you.

While the mainstream medical establishment seems to have tried level-best to thoroughly research the actual incidence and mechanism of SJS following vaccination in both children and adults, the news of CDC admitting in 2010 to a possible connection with  the MMR vaccine was a shocker the mainstream media conveniently ignored. The news appeared in Lawyersandsettlements.com and CDC was cited saying that one in five children suffers MMR vaccine’s side effects, including SJS! Alternative health news sites linked to this story about CDC on MMR vaccine and SJS, but the corporate media that has been misleading the public for decades stayed silent—for obvious reason of course.

Independent and honest research is seriously needed to uncover the real connection between vaccination and SJS—keeping in mind that SJS can be fatal aside from being very painful.