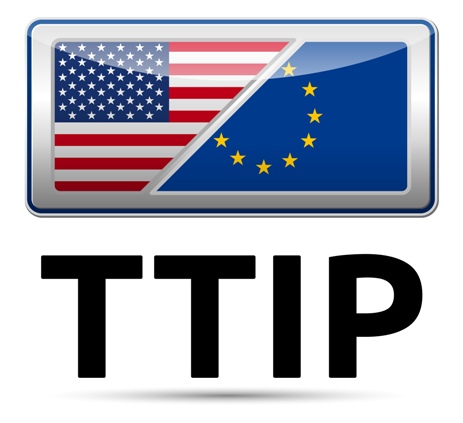 When President Bill Clinton moved the North American Free Trade Agreement (NAFTA) in 1994, Mexico’s farming was destroyed and scores of Mexican farming families had to struggle for food and work since subsidized, cheaper American corn flooded Mexico. The dark aftermath of this free trade agreement is detailed in the book Stuffed and Starved, by Raj Patel, which shows how this kind of free trade gave hundreds of thousands of Mexicans into shackles of debt, hunger, and joblessness. Among other effects, the Mexican migration to America was in large part a result of this agreement.

Two decades later, another big free trade agreement is being fast-tracked under the name Transatlantic Trade and Investment Partnership (TTIP), this time between the US and Europe. A Yahoo News front page story mentions a big public protest in Germany against this new trade deal. Protesters reportedly have expressed distrust of the American government and expressed fear of violation of many rights including the right to say No to genetically modified organisms (GMOs) in the European Union.

As The Independent cautioned last year, free trade agreements take away protective barriers from the country r region which is targeted by the big agricultural/chemical companies whose stakes are involved in trade agri commodities. Farmers are robbed of their rights; environmental safety is set to the back row, and financial slavery is imposed on farming communities, particularly independent and organic farming.