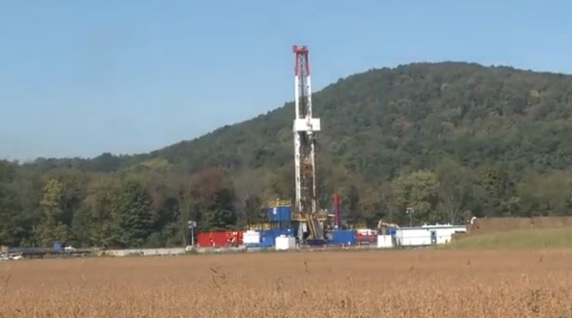 From award-winning director Renard Cohen comes a documentary that takes one of the most important topics of the day, particularly in America – fracking. Cohen’s 2014 film Groundswell Rising, Protecting Our Children’s Air and Water explores the issue of fracking for natural gas in the United States and its impact on health and environment. The 70-minute film covers a lot of ground and creates awareness about the disastrous impact of fracking on life and land. Renard Cohen is here to have a chat with me about the film which is making its theatrical premier at Maysles Cinema in New York on April 17.

Ernest: Renard, thanks for taking time to talk about Groundswell Rising. Is it your first film about any issue arising from impact of industry on health and environment?

RC: Thanks for the opportunity to tell your readers about Groundswell Rising, Protecting Our Children’s Air and Water. This is Resolution Picture’s first feature documentary and our first about the challenges of the practice of fracking and the threat of the climate crises. Previously Resolution Pictures, run by my brother Matt Cohen and I, has produced for The Food Network, Fine Living, PBS, HGTV, and others. We have been in the business for over 25 years and have won 2 Emmys.

Ernest: What drew you to the topic of fracking for a film project?

RC: I first learned about fracking at a teach-in at a local public library. Dr. Theo Colborn’s film What You Need to Know About Natural Gas Production was shown and it really opened my eyes to this threat. I could not believe that this was going on and that there was no huge public outcry. Also at this meeting, there were two women who were working on organizing communities to resist fracking and keep it out of their towns. I was impressed by the passion and knowledge of these ladies and decided to make a film about the resistance to fracking and the people who are dedicating so much to protect our environment and our future.

Ernest: So, before I turn to other questions, what does the film’s title imply?

RC: A groundswell is a rising tide of public opinion about an issue or an awareness of an issue. Many movements such as civil rights or getting cigarette smoking out of our environments start as radical ideas embraced by just a few, but as knowledge grows, and more people understand the facts, a groundswell of opinion can grow to effect elections, local laws and social policy. I guess this is how democracy works and we need a groundswell of understanding about our responsibility to face the climate crises now more then ever.

Ernest: The film is shot in various locations and takes viewers to many different places and people in the United States that affected by or related to the issue of fracking. How long did the project take you and who funded it?

RC: We worked on the film for over 4 years and the areas shown in the film are still being impacted by fracking. The film was minimally funded; we have a nonprofit Resolution Media Fund and received a small about of private donations and a few small grants.

Ernest: Was it an easy venture? And particularly, did you get good cooperation from all people or groups that you contacted for interviewing for the film?

RC: The production was not an easy venture but gratifying. The people we interviewed were very gracious with their time and allowing us into their homes. I think they understood that our goal was to help tell their stories and get the word out about what they are facing.

Ernest: I felt that more film time was given to people whose health or surroundings were affected by fracking than to others, like scientists or lawmakers etc. Was it meant to keep the film’s focus mainly on civilians probably because you see it as a civil rights issue?

RC: While we do see this as a moral and civil rights issue, we tried to include both people who are being impacted and those who are working so hard to make changes, on the local level and wider.

Ernest: I loved the song “Texas”. Please tell a bit about it, or how you came to include it in the film?

RC: We had the opportunity to film a concert given by Natalie Merchant in Binghamton NY that was held for the purpose of bringing together people who are opposing Fracking. It was a full house. The performance of “Texas” in the film predated its release on Natalie’s latest album “Natalie Merchant”

Ernest: What do you aim to achieve from Groundswell Rising?

RC: My goal and first intention for the film was to help bring out the voices and work of those passionately trying to spread awareness of the dangers of fracking and the dire need to respond to the climate crisis. Most of the people working in this area are not funded or paid in any way. They use their own resources and are driven by the desire to do good and important work. I think the film can and does help in their work and I hope more and more people will use it to get the message out and help grow a groundswell of understanding. With this knowledge people can make intelligent decisions at the polls and with their pocketbooks.

Ernest: And how has the audience’s response been so far?

RC: The response to the film has been extremely positive. We get requests for screenings daily and with our distributors, Bullfrog Films and Sideways Film, we have been in 7 film festivals so far, shown on TV and have had many college, church and organizational screenings. On May 15 – 21 we will have an LA Theatrical Premier, see groundswellrising.com screening page for details. People are using the film to show legislators and it is having a positive effect and opening minds. Many people have not heard about or considered the facts and personal stories seen in the film. People who come to our screenings have told us that they have had their opinions about the safety and wisdom of fracking changed.

Ernest: Has there been any response from the authorities or stakeholders in oil/gas industry?

Ernest: Given that it’s such an important topic, have mainstream media given sufficient coverage to the film?

RC: We have not had a lot of mainstream media attention for the film as yet. But the film has only been out for 4 or 5 months and we expect that the media will take notice as the buzz grows. We hope that our LA Premiere will garner more attention and as the climate crisis issue” heats up” (take the pun if you like) I think Groundswell and the other films that deal with these issues will become more important.

Ernest: Thank you Renard. I absolutely loved the question tossed in the film – if we don’t do it, who will? – and wish you success with your endeavors.

RC: Thanks very much for the opportunity to share my thoughts. I would also like to let your readers know that I am also a musician and composer and have written and recorded the theme song for the film. The song “Groundswell Rising” can be heard on renardcohen.com. A CD that supports the film “I See A Groundswell…” will soon be available on my website, on ITunes and many other outlets.

For more info on the film and to see where it is screening please check out groundswellrising.com and Bullfrog Films to arrange a screening.