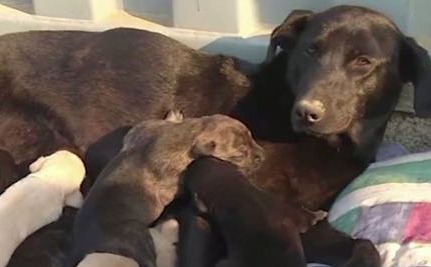 Nothing like a mother’s love! That’s what being said now of the mama dog in Chile who saved her nine small pups from raging fire in a way only the most intelligent of beings could have done.

Care2 details that the homeless dog, now named Negrita, had 9 pups about 2-week old when they were all caught in a forest fire in Chile. Seeing no other way to take all her pups out of the fire, Negrita dug a tunnel in the ground and put her pups in there, covering it with a metal shield.

Eye witnesses of the incident are said to tell media that Negrita stayed nearby and watched the area and after the fire was brought under control by firefighters, she led the rescue team to her pups.

A YouTube video of rescuers taking Negrita’s pups out of the tunnel, all alive and safe, has been got hundreds of thousands of views on and the mama dog’s intelligence is getting a lot of media attention. Indeed, nothing like a mother’s love!