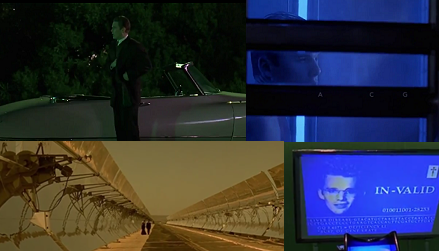 Andrew Niccol’s Gattaca (1997) is a sci-fi film set in future in a society where children conceived under supervision of the state are considered genetically fit for filling important roles in workplaces, termed “valid”, while those conceived without genetic manipulation are considered “invalid” and are deprived of lucrative opportunities. 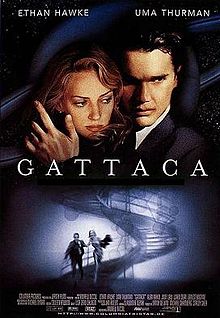 The film’s protagonist Vincent Freeman (Ethan Hawke) is an invalid who grows up with a low self-esteem due to his physical weaknesses in comparison with his brother Anton (Loren Dean). Vincent crosses paths with Jerome Eugene Morrow (Jude Law), who is a former swimming star but now disabled due to an accident. They both agree on letting Vincent assume Jerome’s identity and pursue Vincent’s life-long dream of space travel via the Gattaca space institute. But throughout this journey to the realization of a dream, Vincent essentially remains on a run from his core identity and by sharing his dream, Jerome also shares the state of denial against his own identity as a disabled person.

The theme of a lead character in escape from his core identity is well highlighted by the filmmaking techniques employed in the production of this movie. Two prominent ones of these techniques include the application of color and mis-en-scène, as explained in this essay.

Color – Blue, Yellow, and Green: The film’s opening sequence starts with the theme of escape from one’s core identity as we see Vincent shaving and scrubbing his body clean of all hair in the bath before burning the hair in an incinerator. The scene is filmed in blue light, imparting the feel of the night, i.e., implying the time when he has not “woken up” to reality and is starting to pursue his dream, much as sleeping people usually do during night. On his exit from the bath and into the room, he is in the dim light of the interior, completing procedures that are part of his assuming a new identity.

Throughout the film, and particularly in scenes at the Gattaca facility, where Vincent works under a false ID, and continues to be in denial of his real self, yellow lighting dominates the screen – the associated feel being one of sickness or lack of wholeness. But in contrast, scenes where the real attributes of Vincent’s original identity are in play carry a tint of green. At the 62nd minutes in the film, Vincent finds it hard to cross the road without lenses due to his old vision problem and we see green tint as he keeps looking for a chance to get across the street. Ten minutes later, in the chase scene while escaping from police, Vincent hits a cop crossing his path against the backdrop of a green building, implying his real ID in play.

Again, a light green tint goes in the resolution scene where Vincent and Anton swim in the ocean – this time both brothers in their core identity roles, one not as cop and the other not a Gattaca worker, but brothers competing for superiority as they had been brought up. In the final sequence, when the space vessel is about to launch, Jermore is in the incinerator, ending his life as he is in his dream state, the dream being fulfilled. Instead of accepting his status as a disabled man, he is now on escape in pursuit of a dream that has already become true. So it’s blue color, of the moonlit night, for Jerome’s dream, coinciding with the end of his life.

Mise en Scène: Interior versus Exterior: Gattaca shows a recognizable pattern of scenes set in interior or exterior corresponding to the lead character’s core versus assumed identity. Throughout the film, when Vincent is seen with his true identity in action, the scenes are shot in exterior. These include his childhood scene of competing with Anton in the ocean, his experience of difficulty in crossing the street to get to Irene, his act of hiding his hair on the shore (after sleeping with Irene), and the denouement scene of swimming with Anton.

Scenes of Jermore’s character are nearly always shot indoors, primarily because his real identity has been lent out and he is now in constant wait for the moment when his dream materializes – until then, he is in a state of a dream, though out of sleep. There is one moment when he and Vincent are both in exterior at night, looking at the sky and talking about the dream travel. That is an interesting and insightful moment since both characters are true to their identities in that moment, talking about their dream and in a way accepting of their real IDs, knowing their truth and acknowledging it. That makes good reason for letting them be seen out in the open, though it’s still night (reminder of the sleep/dreaming state).

Yet another interesting scene is the car ride sequence with Vincent and Irene. While Vincent is being himself, wearing his lenses, while the car drives out in the open, they are stopped by security at a checkpoint inside the tunnel. That is where Vincent secretly removes his lenses to appear “valid” in the database, i.e., under Jerome’s identity. This scene is in interior again while outside the tunnel, Vincent’s original identity returns in action when he finds it difficult to cross the street due to his original weakness of eyesight.

The use of both color and mis-en-scène show patterns of depicting the theme of conflict between the lead character’s core identity and his assumed identity. Color blue is symbolically used to the effect of depicting the motif of dream pursuit which is a central element of the character’s escape from his core identity. Green, on the contrary, has been used to depict one’s real, suppressed ID that takes over at times. Similarly, the film shows outdoor scenes of the protagonist at times when his person is dominated by his real identity while scenes showing his character on the run from the real and seeking refuge under his assumed identity consist of interior shots. The final shot, filmed with the voiceover mentioning “going home”, ends in the open, in outer space, resolving the conflict and assuring that the character has come to terms with his real identity.

One thought on “Gattaca (1997)—Thematic Depiction of Escape, Dream, and Reality”