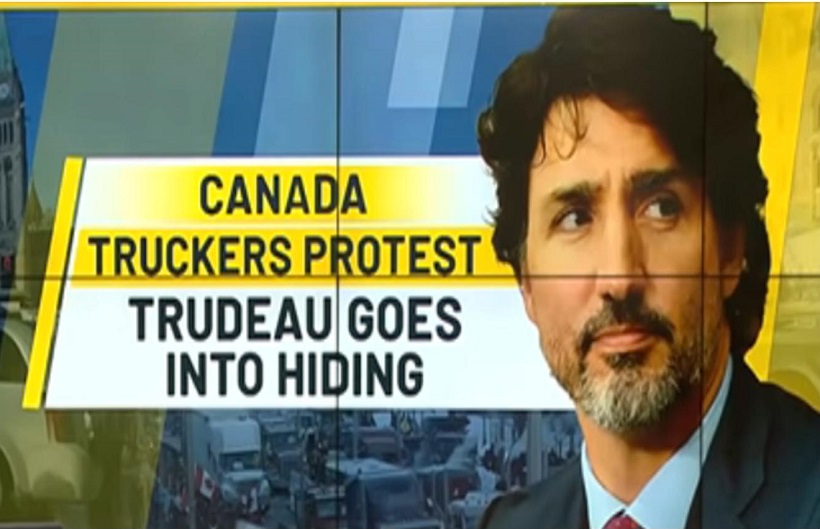 The farcical leadership of Canada’s so-called Prime Minister Justin Trudeau has been exposed before the world as the vaccine pusher escaped from Canada’s capital Ottawa amidst the big truckers protest and is now faking a COVID test result to save face.

Seeing the truckers protest coming to Ottawa, Trudeau posted on Twitter that he has learnt that he got exposed to COVID-19 and will be working from home. In the same tweet, he told that his COVID test result using rapid tests was negative. The Counter Signal reported:

PM Justin Trudeau has taken it upon himself to go into hiding for precisely five days over COVID despite testing negative for COVID.

Trudeau provided no evidence of how where and when he was exposed to COVID. Being fully vaccinated, his announcement to go into isolation despite negative tests belied his push for vaccines and his vaccine mandates against which the truckers are protesting right now in Ottawa.

Then it was reported that Trudeau and his family were moved to a secret location on Saturday, the New York Post reported.

WION asked the question the Canadians were asking when the news of Trudeau’s escape spread across the news outlets: Where is Justin Trudeau?

Seeing that critics are talking about him as a coward who fled the scene of a peaceful protest, Trudeau seems to have thrown a quick face-saving stunt out there. He now claims he had tested positive along with a child of his so he is continuing to work remotely. Global News included Trudeau’s tweet claiming a positive test he got this morning.

Trudeau added it is “frustrating” that COVID-19 remains so dominant in the lives of Canadians two years after it first emerged, but that he continues to encourage people to get vaccinated.

The great escape of Trudeau has shown Canadians and the world the good-for-nothing character of a weak and coward head of the state, who can’t lead but has to disappear when it’s time to address a crisis.